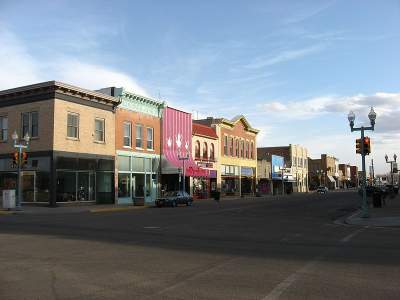 October was National Arts and Humanities Month, and along with November tends to be the busiest time for cultural programming in Wyoming. Between attending events and helping my fellow Wyomingites find out about them, the significance and impact of the creative and cultural network of Wyoming has come into sharper focus for me than ever before. I am not alone; Senator Mike Enzi opined on Wyoming’s creative minds in an op-ed on October 10.

In one ten-day stretch in early October, I attended the Laramie Lyceum lecture series, the UW Art Museum Gala, an incredible performance of Locust the Opera in Laramie, a panel discussion with two former governors called “Breaking the Boom and Bust Cycle in Wyoming” in Rock Springs, another panel discussion on Hemingway in Wyoming in Cheyenne, and finished it off with a breath-taking performance of “Tales of Hemingway” by Grammy-winning artist Zuill Bailey and the Cheyenne Symphony. A day later I drove to Riverton to present to the Wyoming Legislature’s Select Committee on Tribal Relations about the impact of our “Two Nations One Reservation” exhibit and other American Indian cultural and educational projects we’ve invested in this past year.

I have a front-row seat, as both an audience member and an investor, to many of the incredibly rich and diverse events and projects that comprise the brilliant tapestry of Wyoming’s creative and cultural ecosystem. I know how much work it takes to put on an event, from small local discussion groups to some of the state’s largest programs, concerts, exhibits, and festivals—each event requires a great deal of labor and sometimes a lot of money. From the hours and hours of meetings to discuss the intent and impact and overall design of a project, to the expertise deployed to market and advertise, to the management and logistics of running an event—this is the work of professionals and volunteers and it adds up. When you factor the impact of the people who come to these events, some traveling to the host community and spending money there, the whole project can add up to a lot of economic activity. A whole lot. It’s time for Wyoming to see just how much.

I believe that if we carefully defined and then accurately measured and monitored the scale of the creative and cultural economy, our state’s leaders would be shocked and awed. How much did hosting the Teton County Pow Wow cost? How many people worked to put it on? How many came to the event? How much did they spend in the town? What are the intangible and tangible benefits of hosting an event like that and how does it intersect with tourism? Who came to Meeteetse to listen to and learn about Basque Country music and the role of the Basque in Wyoming history and what kind of resources and time did the Meeteetse Museum and their collaborators put into this event? From “Classics in the Park” in Cheyenne to celebrating the 50th Anniversary of the Apollo 11 lunar landing in Torrington, to bringing the International Hemingway Society’s Biennial Conference to Sheridan to our partnerships with sites all around the state to host a Smithsonian traveling exhibit that focuses on Change in Rural America—Wyoming has a vast cultural and creative network putting on an incredible variety of events.

We talk about these endeavors in terms of their enhancement of the quality of life in a community. That’s absolutely true. They tie us together and make our towns and regions stronger. A vibrant art and culture scene attracts residents and businesses to a community and prevents youth outmigration (a major concern about which our state leaders are seeking solutions) and that is a good reason to support this sector with public and private investment. But evidence suggests that art and culture can do more for us. Creatives want to work in creative areas–clustering as they attract more artists and cultural workers who want to work in an environment that is innovative and facilitates interaction. These clusters grow and attract more artists and cultural workers. Creative Placemaking intentionally leverages the power of arts, culture, and creativity to serve a community’s interest while driving a broader agenda for change, growth, and transformation in a way that also builds character and quality of place. We can get and keep more people in Wyoming if we focus on this sector.

Art galleries, history museums, theater troupes, writers, saddle-makers, cultural centers, symphonies, operas, artists of all stripes, film-makers, song-writers and band members, I could go on and on about the people who work in this sector. From Hulett to Evanston and Pine Bluffs to Jackson and all of our towns in between, every one of the state’s 99 communities has a cultural narrative and most have residents who make some or all their living in the creative or cultural sector. Even our smallest towns could support more artists and venues to promote their community’s story—we just need to give them the tools to attract them. A community’s creative/cultural clusters can become important economic drivers to attract skilled labor and innovation to a specific place and bring a whole new energy to the region.

According to a recent article in the Casper Star Tribune about Halliburton layoffs of oil and gas workers in the Rocky Mountain region, the latest data released by Wyoming’s Economic Analysis Division indicates the oil and gas industry provides about 12,500 jobs to workers throughout the state, a 2 percent decline from the same time last year. Federal Reserve Economic Data shows around 4,700 coal miners in Wyoming. To put this sector into perspective, the most current data for arts and cultural jobs from the Bureau of Economic Analysis indicates Wyoming has had a 2% increase employment increase from 2014 to 2016 and employs just under 12,000 people. In 2014, the most recent analysis available, Wyoming’s employment in the creative and cultural sector as a share of the total labor force was 30% higher than the national average and second only to New York. This sector is strong in Wyoming, a solid base from which we could grow and diversify.

We seem to be coming to an agreement that Wyoming is destined to continue to lose coal, oil, and gas jobs over the coming years. Just this week we found we face another major budget shortfall and heard once again the calls for tightening our belts and finding new ways to fund our public needs. For several years our state’s leaders have worked diligently to figure out ways to diversify our economy and move us toward a future that is less fraught with the boom-and-bust cycles of dependency on a single sector for employment and for revenue. Why not put forth a similar amount of support to protect and grow the creative and cultural sector as that of the energy sector? Of course, I’m not saying that the creative and cultural economic sector could entirely replace the energy sector—but if we are currently about 4.7% of the state’s economy, is it not reasonable to think that with a well-managed concentrated effort we could grow it to be 10% or 12%? Perhaps some of our coal miners and other energy workers would even become part of this sector. This support would have the double benefit of helping towns cope with job loss and youth exodus.

It’s thrilling to imagine what Wyoming’s future could be. With such a small population and with such big changes in our economy coming down the pike we are going to have to be innovative and, dare I say, creative. We already have a solid, collaborative infrastructure in place to serve Wyoming’s creative and cultural network—the arts council, public television, public radio, cultural trust fund, office of tourism, and humanities council. Inventive public stimulus investment and unique new private-public funding strategies to support this creative and cultural infrastructure could grow this blossoming sector, perhaps to as much as 10 percent of our economy in 10 years. That would bring thousands of new jobs to the state, including independent artists and authors, people working in museums, theaters, dance troupes, arts/crafts coalitions, bands, galleries and creative industrial endeavors. This conversation has already started as the ENDOW report released last year called for stimulating the creative economy, and the upcoming Governor’s Business Forum put on by the Wyoming Business Alliance features a panel session, “The Creative Economy, Adding Value to Wyoming’s Bottom Line” where Montana and New Mexico leaders will discuss with Wyoming how they successfully grew and supported their creative economies.

The most popular places to live in America feature energetic arts and humanities scenes; can you imagine a state with our amazing landscapes being able to claim we are the most “creative state” in the nation? Not only would tourism increase, young people would flock here to put down roots and start businesses. Creativity is the root of all innovation. One way to proactively shape our future is for Wyoming to strive to be known as “The State of Creativity.”