When all you've got's a hammer … 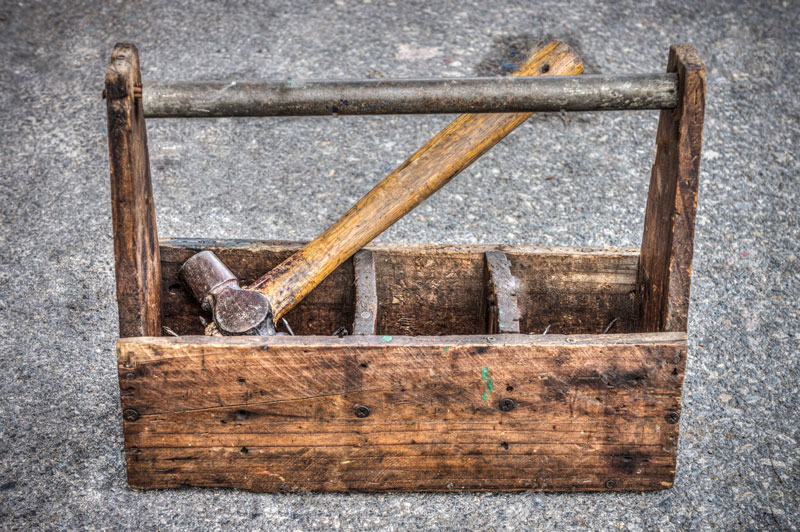 In the last three decades there’s been a crisis, of sorts, for the humanities to prove their value to our society. Some of our greatest thinkers have taken up their quills to defend an activity often seen as the scholarship of leisure. In general, these screeds have either bored people to tears or made enthusiastic claims that seem either too pie-in-the-sky or immediately irrelevant to your average working family.  It’s a type of handwringing we’ve nearly gone deaf from, and one I don’t want to engage in.
So instead of joining that whispering chorus, I’ll quote Wyoming’s own “Trailerpark Troubadour,” Jalan Crossland: “When all you got’s a hammer/the whole world looks like nails.” It’s from a yet unrecorded song I heard him sing about a month ago at the Yard in Saratoga. And though it’s newer I saw the whole crowd sing the chorus with him by the third verse. The song is an anti-military-industrial complex tune that deals specifically with current/failed Mideast policy.  But, at its core, the song is every argument for the humanities we should ever need.

‍
When all you got’s a hammer…
The humanities are simply a toolkit for translation. Whether literally through subjects like foreign languages or linguistics that allow us to translate discussion directly or through cultural or historical understanding that helps us suss out the deeper meanings and belief systems of other people, without the humanities we lose the ability to work together towards common goals.

‍
I’m reminded of the “Tower of Babel” from the Book of Genesis, an etiological myth (one that explains a phenomenon—in this case the reason people speak different languages). In the story, the God of the Old Testament saw that mankind could do anything it set its collective mind to and, due to mankind’s hubris, Yahweh decided to break up the tribes working on the tower by giving them all different languages. The people couldn’t communicate, so they couldn’t work together, and the project to build a tower to heaven came to a screeching halt.  It didn’t take an earthquake or war, just a basic inability to communicate.  What’s interesting is that stories similar to this can be found in cultures the world across dealing with the proliferation of languages. No matter where our cultures began, we saw our inability to communicate with each other as being a central roadblock to working together.

‍
When all you got’s a hammer…
There is an aphorism, based off a John Adams quote, that goes something like: “We study war, so that our children may study science and engineering, so that our grandchildren might study poetry and philosophy.”  This has been our attitude towards the humanities for far too long. What if we studied poetry so our children would use science and engineering in ways that their children wouldn’t have to study war?  Isn’t that the whole point of a democracy—to listen to the voices and needs of the people and avoid our baser instincts through civility? How often do we tell upset children to “use their words,” not their fists or teeth? On both local and global scales the humanities are those words.

‍
Earlier I used the term scholarship of leisure—those “effete” activities like reading poetry and contemplating the meaning of life.  Traditionally, we have seen humanities study as something for the elite/wealthy, and in doing so we’ve drawn class barriers around them. When we imagine foppish, wealthy Englishmen doing something for the appearance of civility, it’s probably “humanities” related. This myopic attitude makes us see the works of John Keats and other long-dead geniuses as being something greater than the works of Wyoming’s modern genius Jalan Crossland. We shouldn’t. When Jalan writes about a veteran trying to understand his own heart and the heart of America in a song like “Big Country” or the heartbreaking realization of two meth-heads on a date that they will never escape their hometown, he is asking the listener to consider deeper human questions relevant to our modern times. The biggest difference between him and Keats is that young Wyomingites don’t go around reciting the lyrics of Keats. Paying closer attention to Jalan’s lyrics, having a conversation and thinking about their meaning, puts him in the same league as any poet in the “canon” of great literature.  But, to do so requires a type of literacy that comes from active participation in the humanities.

‍
Getting people to do this falls into the realm of Wyoming Humanities. Our entire purpose for existing is to get Wyomingites to “Take a closer look” at the expression of human experience. If we are going to learn more constructive ways to fix complex problems in the world the first step is to get us to realize that the humanities aren’t boring, fusty old texts. They are alive, modern, important, and that the mediums of their messages are often quite danceable.  But don’t take my word for it, take a closer look yourself. You might be surprised by what you find right here at home. You can’t build or fix anything with a hammer alone.