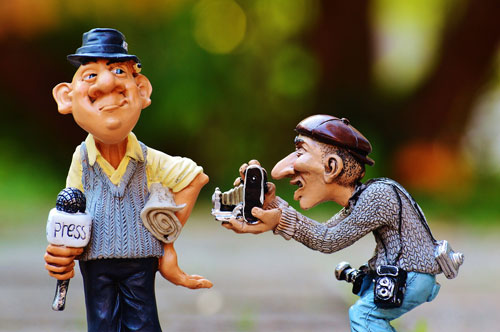 Earlier this month “fake news” got daily coverage when a man shot a rifle in the Comet Ping Pong pizzeria in Washington D.C. Having read online articles claiming (falsely) the restaurant was the center of a child sex slave ring, Edgar Welch of North Carolina traveled to the pizzeria to investigate the claim, ultimately firing a gun inside the restaurant and frightening workers and customers. Welch was arrested and, in an interview with the New York Times, admits “the intel on this wasn’t 100 percent” but pushes back on the label “fake news”:

He said one article on the subject led to another and then another. He said he did not like the term fake news, believing it was meant to diminish stories outside the mainstream media, which he does not completely trust.

Welch was convinced (wrongly) of this conspiracy theory in part because of the multitude of articles on the subject: one article “led to another and then another.” Two related issues emerge from this extreme example of fake news’s negative impact: news consumers’ ability to distinguish between “fake” and “real” news and media sources’ credibility in the American public’s eyes.

Consumers’ ability to identify trustworthy news stories is…not great. A recent survey by BuzzFeed News, for example, found fake news “headlines fool American adults about 75% of the time.” Those who get most of their news from Facebook are especially susceptible to being taken in by false headlines. Who is responsible for marking such news as fake is hotly contested. Some claim websites such as Facebook and Google need to shoulder the responsibility for marking false news as false, while others (including Facebook, until very recently) cite the personal responsibility of readers themselves.

To muddy the waters even more, Will Oremus points out the label “fake news” is thrown around to not only to refer to made-up “news” stories but also applied to coverage with a liberal or conservative bias. That is, pieces that should be categorized as opinion pieces or “slanted” news become labeled instead as fake news by folks who disagree with that piece’s content. Labeling this type of content “fake” blurs perceptions implying disagreement with a policy or point of view is the same as straight-up lying about it.

The American Press Institute’s “Six questions that will tell you what media to trust” highlights the necessity of determining whether what you’re reading or watching is an opinion piece or an unbiased reporting of facts. A news story, the article highlights with its first question, is different from an ad, which is different from an opinion piece, which is different from a reaction to someone else’s content. The rest of the questions are just as good, asking the reader to: consider the reliability of cited sources; the vetting of evidence; whether the piece’s conclusion is supported by its evidence; and what the piece might be leaving out. These criteria go a long way towards helping someone assess whether an article represents only one side of an issue or presents a balanced account.

Given the furor over the “mainstream media” and its reliability (or lack thereof), it’s easy to forget that last year’s Oscar “Best Picture” winner is a testament to the impact of careful, thorough reporting on local and national communities. The trailer for Spotlight, with its dramatic music and clips of Mark Ruffalo shouting in indignation, implies the film might fall into a Tom Clancy-style story of threatened lives as reporters get closer and closer to exposing the truth. In reality, the film is quieter and, I would argue, more powerful than that. The majority of the movie follows the Boston Globe’s Spotlight team as they track down sources, and then secondary sources to back up those sources—the daily work of reporting. In fact, the movie’s climax involves a reporter convincing a friend to confirm what he knows about the Catholic Church’s sexual abuse scandals—not exactly a chase scene. In its quietness, Spotlight pays tribute to the hard, meticulous work of Spotlight’s Pulitzer Prize-winning team, showing just how important and game-changing that reporting was.

In a very different format, a Missouri School of Journalism senior class also highlights the impact of quality journalism on local communities through a project called No Small Pulitzers. The site features interviews with Pulitzer winners from news organizations “with daily circulations under 100,000.” Not the Boston Globe, but rather the Colorado Springs Gazette, the Great Falls Tribune, and the Grand Forks Herald. One of the lessons the class’s professor, Jacqui Banaszynski, hoped students learned is  “[t]his kind of work still makes a difference, and it probably makes a more tangible difference in smaller communities […]. I really wanted them to see that the work that you do is essential to these communities […].”

Over the past year, Wyoming Humanities has also invested in exploring the impact of journalism on local communities. “Reporting on Equality in the Equality State: Wyoming’s Journalistic Past, Present, and Future,” a program that commemorates the Pulitzer Prizes’ 100th anniversary, saw WH partner with WyoFile.com, WyoHistory.org and the Wyoming Press Association (WPA) to produce a series of in-depth articles that examined journalism in Wyoming using past Pulitzer prize winning-topics as a lens to view similar issues in the state. WyoHistory.org, in partnership with the WPA, produced profiles and stories about pivotal journalists throughout Wyoming’s history. WyoFile published a series of articles that exemplify the impact of journalism and the humanities in American life today. From a story about President Obama releasing a Casper mother early from a long prison sentence to research on Wyoming workers’ compensation fraud, WyoFile set a high standard, each story demonstrating the values represented by the Pulitzer-prize winning journalism.

News—of both the Pulitzer-Prize winning and “fake” varieties—make lasting impacts on our communities, both local and national. Our hope is that you’ll be more inspired by the former than the latter, taking a closer look at the credibility of sources before hitting that “share” button on Facebook. In the meantime, explore WyoFile’s Pulitzer-inspired articles, investigate the Pulitzer site’s thorough collection of prize-winning journalism, and learn more about Wyoming Humanities’ Initiatives, including the Pulitzer Centennial Campfire. And maybe, just maybe, include in your New Year’s resolutions one about continuing to think critically about what news stories you’re consuming.