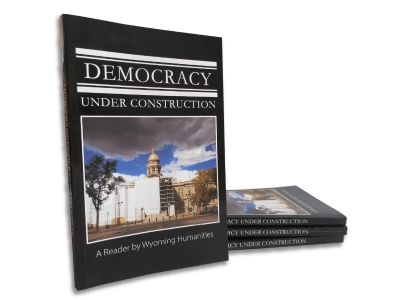 What is democracy? What does it mean? What does it look like? Over the course of roughly 250 years, it has been a question debated, argued over, and restated. The answer has changed, distorted, and aligned with new ideas. It is a work in progress, something “under construction.”

This spring, Wyoming Humanities will release a new version of our original publication titled “Heal Up and Hair Over.” The book itself has changed, and it is now listed as “Democracy Under Construction.” However, the premise remains the same. It is a conversation starter about the idea of democracy and how it works and doesn’t work – perhaps where we can make improvements and how.

As we approach the 2020 election cycle, we hope many will consider the ideas held within its cover. The ideas represent many influential and thoughtful figures from US and Wyoming history. They speak truths that should make us question, if nothing else, how democracy works – not Congress and the White House – but our individual roles within this process.

Here John Stuart Mill argues a principal foundation of democracy is the role and morality of public discussion. In this, it is our responsibility to respect “the side which a person takes, though it be the contrary side of the question from our own…giving merited honour to everyone…who has the calmness to see and honesty to state what his opponents and their opinions really are, exaggerating nothing to their discredit.” But why?

In “Hamburgers in Jeffrey City,” Marko Ruble tells us a story of an encounter with an individual with widely different political opinions than his own. Aside from the well-worn story that Wyoming is one big city with a very long street, he argues this respect is a fixture of Wyoming identity: independence. He states: “A truly independent person will respect another argument. It’s inherent in the ability for one to call oneself independent.”

Shortly after President Trump’s impeachment vote, I noticed a Facebook post from Wyoming Sen. Enzi. It ended with a message about moving on and moving forward. He said “Too often it feels like our nation is only becoming more divided, more hostile. I do not believe that our country will ever be able to successfully tackle our looming problems if we continue down this road.” I may not always agree with the Senator’s opinions, but I was struck by the perceived calmness.

While other Congressional members constantly berate the other party, jockey for minutes on the national media, and make brazen insults towards their colleagues, Sen. Enzi  does not engage in this. So far as I am aware, this is the only thing he chose to say. And it mirrored what Ruble and I believe is important about Wyoming, democracy, and our respect for other people.

Though I have no idea if Facebook is commonplace enough for senators to take notice, I want to thank him for this. It may not have been enough for some, but it is for me. So, I said these very things. It is not political. I do not agree or disagree with his vote or opinion on the matter. I thanked him and noted that I hoped his replacement will be as well composed.

Facebook is not the place you go for agreement, for conversation, or for much else. Nevertheless, I am struck at how quickly my moderate offer of gratitude was assaulted. Within the day, I was accused by another Wyomingite of being a “bot.” Another lovely individual found the elementary school inspiration to note my last name can be mistaken for “wannabe.” Perhaps more notable was the truth I found in Sam Western’s included article that “In these places, no one is a stranger. Cuss at someone at a country commissioner’s meeting and, sure enough, you’ll see them at the grocery store. This is not the “6 degrees to Kevin Bacon” game. These are people in organizations I work with, or people who work with people I know. Within minutes outside of the online forum, I could have easily reached out to confirm I am real and my name, though awkward to pronounce in English, was very commonplace in Heart Mountain 80 years ago; my Japanese-American heritage is a point of pride.

In many ways, our technology has brought us together, but it also draws us apart on things that matter. It is clear these individuals did not agree with what I had to say, but as Western notes: “Honesty for honesty’s sake can border on vanity. …democracy depends on more than participation and what we say…It obliges adult civic choices when we are alone; [when] we have less compunction about our choices when sitting solo before our computer.” Democracy is not accomplished through “work-avoidance schemes.”

The news media is full, and will only continue to be full, of this divisive, maligned, and even hurtful news. We do not need to add to the cacophony. Over the next year, we will undoubtably, each of us, encounter individuals whose version of democracy will seem counterintuitive to our own. Yet, we are all Americans, and though there is work to be done, this is our democracy. As Terry Tempest Williams ends her article:

If we cannot engage in the respectful listening, there can be no civil dialogue, and without civil dialogue, we the people will simply become bullies and brutes, deaf to the truth that we are standing on the edge of a political chasm that is beginning to crumble. We all stand to lose ground. Democracy is an insecure landscape. Do we dare to step back – stretch – and create an arch of understanding?