The Capitol Grand Re-Opening: the Importance of Our History and Heritage 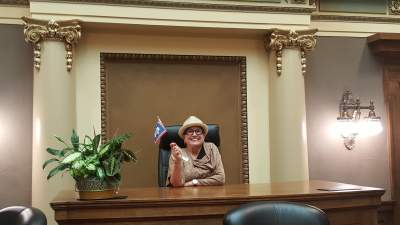 It was a magnificent day. The crystal clear blue sky set the stage and the cheerful, buzzing anticipation of the crowd was not dulled in the slightest by the mid-summer heat. Standing in the audience as close to the front as I could get, I couldn’t help but think that the splendid atmosphere, without a shadow of a rain cloud, portended great things for our state’s future. July 10 was the long anticipated grand re-opening celebration for our state capitol building and it was a glorious event from start to finish.

Folks of all ages came to listen to Wyoming dignitaries regale us with tales of the history of “the People’s House” as well as to acknowledge all those who came together to make the restoration of this majestic building a reality. Plus, there were food trucks. And music, dance, and theatrical performances as well as cultural demonstrations, exhibits, book signings, an Air Force Squadron flyover, and fireworks. And did I mention food trucks?

The incoming chair of our board of directors and former state senator, Rev. Dr. Bernadine Craft, blessed the capitol with an opening prayer that acknowledged we are in the midst of celebrating the 150th anniversary of Wyoming Territory granting women suffrage. You know it’s going to be a great event when a prayer gets cheers! Our state’s leaders, President of the Wyoming Senate Drew Perkins, Governor Mark Gordon, former President of the Wyoming Senate Tony Ross, and Speaker of the Wyoming House of Representatives Steve Harshman led up to the closing remarks by former Governor Matthew H. Mead, and then the dignitaries cut a giant red ribbon and quickly moved aside for the rushing crowd of Wyomingites wanting to be among the first to see the carefully and lovingly restored building.

Celebrating our capitol’s 130 years brought the historian out in many of our state’s thought leaders. A League of Her Own Acting Troupe, composed of members of the Cheyenne League of Women Voters and organized by another of our board members, Mary B. Guthrie, performed a play, “Wonderful Wyoming Women Voters,” written by Guthrie and Rosalind Schliske, featuring four historical figures involved with passing the first legislation giving women the right to vote and hold office, then with defending the effort to repeal it, and with refusing to deny the vote in exchange for statehood. The cast included Julia Bright, played by Schliske; Esther Hobart Morris, played by Denise Burke; Amalia Post, played by Guthrie, and Theresa Jenkins, played by Debra Lee. Keren Meister-Emerich played the researcher, who time travels to interview these women. In addition to their involvement with Wyoming suffrage, three of these women also had the most important roles in the statehood celebration on July 10, 1890. Post was the chairman of the celebration; Morris presented the state flag to the governor, and Jenkins was the primary speaker.

In his remarks just before the ribbon-cutting, Speaker of the Wyoming House of Representatives, Steve Harshman, brought to life the young engineer from Adam Feick & Bros., the Sandusky, Ohio company that won the bid to build the original capitol in 1886. John Feick, the 25-year-old son of Adam Feick, came to Cheyenne in early 1887 and Wyoming State Archives has several letters he wrote home to his newlywed wife, Lizzie. Harshman brought the crowd to laughter and tears with some of the excerpts he shared:

I suppose you received the letter I wrote you when I arrived. I had quite a long trip, and feel very lonesome and homesick for you, to be fifteen hundred miles away from you and in a part of the country where you have to wear a belly-band to keep your cap on your head is a pretty bad thing.  [I]t is snowing & blowing bad enough to scare a man to death his first night.

A few weeks later in early March he wrote:

There are very wealthy people living in this town but they all look to me like Cow-boys, Lizzie you can not imagine what kind of a country this is… you can go one hundred miles straight out in the country and not see a house or a living sole, but wolves, prairie dogs, deer…

His letter in May described the laying of the cornerstone and he concluded by writing:

I tell you this is a great country for excitement. People are more liberal & a nicer class of people than you find in the east.

Many thanks to Speaker Harshman for sharing parts of his speech with me to share with you. It was quite moving as he used this history to introduce the audience to John Feick’s descendants, including grandsons and great nieces and nephews, from Ohio, where Adam Feick & Bros. still operates today. They all must have been incredibly proud to see this building restored so closely to what their ancestors designed and built. Some of the excerpts from John Feick’s letters are featured in an excellent article on the history of the Wyoming Capitol on WyoHistory.org.

The ceremonies concluded with a Re-dedication of the Capitol Cornerstone by the Grand Lodge A.F. & A.M. of Wyoming, as the Masons of this lodge had conducted the original dedication of the Capitol cornerstone on May 18, 1887. It was a stirring patriotic and spiritual ceremony that captured everyone’s imagination and attention. The children in the crowd were fascinated by the pomp and pageantry—especially the brilliant sword that led the Masons as they marched to the cornerstone. Many historic buildings in the United States have Masonic cornerstones, including the U.S. Capitol, which was laid by President George Washington. The ceremony was solemn, symbolic, and felt very historic and was a perfect way to mark this once-in-a-lifetime event.

Seeing our elected officials and so many state leaders all in one place celebrating such a happy and important event, I couldn’t help but think it was just what Wyoming needed. We have many challenges facing us and a day like July 10, 2019 reminded us that we are all in this together. It also showed the importance of history and protecting and understanding our heritage—and the importance of art and culture to understanding our past and our present. And did I mention there were food trucks?