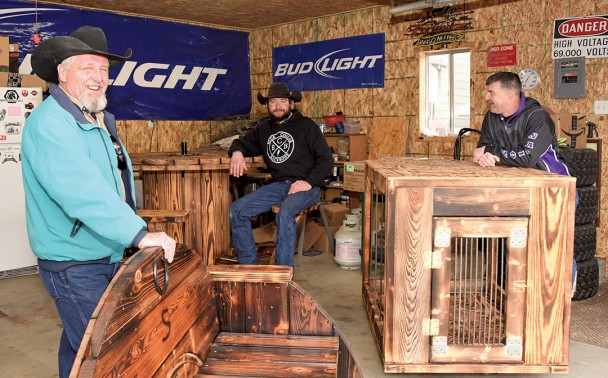 Paul “Cujo” Gudgel (from left), Evan Casey and Kjell Elisson stand by some of their completed works in their woodshop in Glenrock, all made using repurposed spools from energy farms and landfills.

As you explore Glenrock’s new walking path or the community’s new town square behind the Higgins Hotel this spring and summer, you may find some new handcrafted wooden benches for resting.

That’s because there’s a new woodworking group in town and they’re chomping at the bit to create some new rustic furniture for Glenrock residents to enjoy, and others too outside Converse County.

The way they source their materials is what sparked the name: The three Glenrock residents use discarded electrical wire spools from oil and wind energy farms like Cedar Springs, as well as discarded lumber at the Glenrock and Douglas landfills, for their creations.

“We’re taking something that would be thrown away, and building and making something good out of it,” said Elisson, who also coaches wrestling at Glenrock Junior/Senior High School.

The group’s first order was for Knotty Pine Saloon owner Rusty Henderson, for his cancer benefit auction held last October. The group crafted a sturdy wooden bench that was auctioned off for around $300.

The woodworkers have since created a number of other pieces, including a large round gathering table (its base is a repurposed spool), a dog crate, another bench, and a large wooden bar that is going to the Horseshoe Bar & Grill in Casper.

For Gudgel and Casey, the outfit is now also their primary work, after Gudgel lost his job last year at contractor A+ Builders, and Casey left his job at Short Powerline Service.

The group is now being commissioned for more work too, through a partnership they’ve formed with the Glenrock Chamber of Commerce.

As part of the town’s beautification project, the chamber is looking for local businesses and individuals to sponsor new furniture items made by the group, which could then be placed around town, like on the new walking path or at the new town square site once it’s completed.

The workers are ready for the assignments.

In fact, they’re already working on new pieces pretty much every day in the shop.

“We build what the customer wants,” Casey said.

Those interested in sponsoring new pieces can call Kristy Grant at the chamber at 307-436-5652.