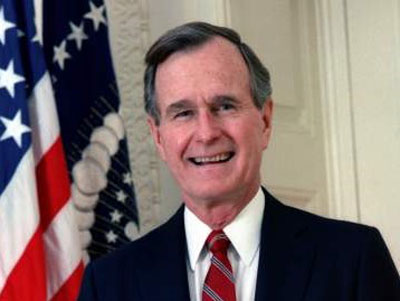 Today is a National Day of Mourning to honor the late former President George H.W. Bush, who died last Friday night, November 30, at 94. Friends and family will celebrate his life during a memorial service at the National Cathedral in Washington on this day. President Trump is expected to attend along with former Presidents Barack Obama, George W. Bush, Bill Clinton and Jimmy Carter.

Wyoming’s former U.S. Senator Al Simpson and his wife Ann were close friends of President Bush and his wife Barbara. Senator Al will be one of the four people delivering President H.W. Bush’s eulogy today, alongside former President George W. Bush, former British Prime Minister Brian Mulroney, and Presidential Historian Jon Meacham. Wyoming Governor Matt Mead is encouraging Wyoming citizens to join with the rest of the nation in honoring former President George H.W. Bush on this Day of Mourning. We at Wyoming Humanities want to join the state and nation in paying our respects by sharing with you how our 41st President supported the humanities and cultural arts.

Just this past Sunday, Former President George H. W. Bush played a prominent role as some of the entertainment world’s most famous faces — including Cher, Reba McEntire and Lin-Manuel Miranda — were lauded in Washington at the Kennedy Center Honors. The night kicked off with an extended standing ovation in Bush’s memory at the request of hostess Gloria Estefan. “I think it’s appropriate to recognize the passing of a wonderful man who dedicated his life to service and who graciously attended this event many times during his administration, laughing, applauding, singing along and even shedding a tear from right up there in the presidential box,” said Estefan, who recalled being invited to the White House and how Bush “literally spent 45 minutes patiently talking to my eight-year-old son” about how the government worked.

During his presidency, George H. W. Bush expressed his support of the National Endowment of the Humanities while other politicians sought to defund public support of the arts and humanities in response to controversial projects funded by the National Endowment for the Arts in the late 1980s. In his fiscal year 1991 budget request to Congress in January 1990 he wrote:

“Direct Federal expenditures and tax incentives for preserving America’s cultural heritage are a relatively small part of the [federal] budget. For a variety of reasons of political and cultural philosophy, they must remain so. But they should never be viewed as so small that they should be overlooked, nor so insignificant that they might be dismissed…Only through the memory and understanding of our past, and the past of other countries whose civilizations have contributed to ours, and to the world, can we gain a true sense of the present and the ways in which we might influence the future.”

In September 1990, as the National Endowment for the Humanities celebrated its 25th anniversary, President H. W. Bush delivered these comments:

“I am delighted to extend warm greetings and congratulations to the staff and friends of the National Endowment for the Humanities as you celebrate its 25th anniversary….The National Endowment for the Humanities has given the American people a wealth of opportunities to learn more about our nation’s history and culture. Its grants, in combination with matching funds raised through private resources, have not only enabled teachers to attend special seminars but also enabled researchers to visit distant archives. They have also helped colleges to create professorships and improve their course offerings, and they have enabled community libraries to sponsor book discussions. Endowment grants have also underwritten major educational and cultural events such as the exhibition of “The Treasures of Tutankhamen,” as well as historical television series such as The Adams Chronicles and, now The Civil War. By helping to make these learning opportunities possible, the National Endowment for the Humanities has enriched the lives of millions of Americans. I commend its dedicated staff and supporters for their efforts.”

Leaders from around the country and around the world are paying their respects and reflecting upon the gentile, civil, kind-hearted and open-minded public servant who was our 41st president. We at Wyoming Humanities share in our nation’s mourning for this great American and are grateful and pleased to share his lifelong appreciation for the work we do.