Our History with Immigration and its Connection to Racism 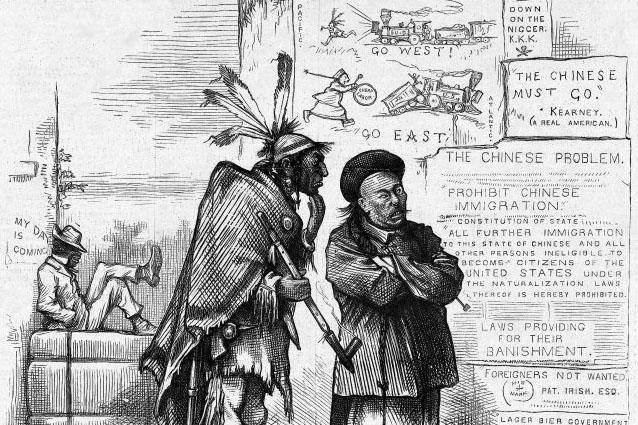 There’s a scene in James Cameron’s now 21-year-old Titanic that, eliminated from the theatrical release, can be found in the director’s cut and, of course, on YouTube. It’s a brief rescue scene: the ship (spoilers?) has sunk and an officer at the head of a lifeboat shines a flashlight into the darkness. “I see him!” he shouts as the camera cuts to a man balanced on a floating door. “Put your backs into it!” the officer cries. The man on the door reaches his hand out to the boat, and shouts something back—in Chinese. From a filmmaking stance, the brief scene doesn’t do much; one can understand why it was cut from the film’s theatrical release. The scene’s treatment, though, can be read as a representative of the broader coverage of the Titanic’s Chinese passengers.

The Washington Post recently noted this omission in its article “Why you’ve never heard of the six Chinese men who survived the Titanic,” highlighting an upcoming documentary that tracks what happened to those six Chinese survivors. The filmmakers had a challenge: when the survivors, seamen by trade, reached the United States they were required to leave within 24 hours, leaving a scant paper trail behind. In contrast, other Titanic survivors were allowed to bypass Ellis Island screenings and/or receive medical treatment. Contemporary coverage of the men, the article notes, was just as unsympathetic as this 24-hour deadline, describing the men as having “sprung into the lifeboats” “at the first sign of danger,” only being discovered once (white) women boarded the lifeboats. (The documentary makers dispute this description of events.) We can locate the difference in treatment of these sailors from other Titanic survivors in the 1882 Chinese Exclusion Act, passed 30 years before the Titanic sank. The Act is generally recognized as the United States’s first major restriction of immigration based on nationality.

The 1850’s California Gold Rush brought a slew of Chinese immigrants, concentrated in California and the American West. Roger Daniels notes in his book Guarding the Golden Door the 1870 census registered “more than 60,000 Chinese, three-quarters of them in California and almost all of them men.” The Chinese workers’ lower wages for railroad and mining work was a source of anger and resentment for other workers and, while these workers’ national origin played an impact, so too did their racial difference. Denis Kearney, the founder of the Workingmen’s Party of California, for instance, described the Chinese workers as “cheap slaves,” “abject in docility, mean, contemptible and obedient in all things.” The “meanest slave on earth” “meet[s] the free American in the labor market, and still further widen[s] the breach between the rich and the poor.”

Kearney, himself an Irish immigrant who arrived in San Francisco in 1868, positions these Chinese migrants as barely human, a mindless horde who “hedge twenty in a room.” Such descriptions emphasize the “otherness” of these migrants; in such numbers, who knows what damage they might do to American workers and the nation itself? An 1880 cartoon from San Francisco’s The Wasp is a visual example of this idea. Chinese immigrants, portrayed as pigs, devour Uncle Sam’s cornfield of industries such as “watch making,” “laundries,” “shirt factories,”” broom factories,” and “cabinet makers.” The gate that allowed them in? The 1868 Burlingame Treaty, made between the U.S. and China, which established friendly trade relations between the two nations and allowed Chinese citizens the right to free immigration and travel within the United States.

Labor tension coupled with anti-Chinese sentiment eventually led to an adjustment of the Burlingame Treaty in 1881 and the passage of the Chinese Exclusion Act in 1882. The 1882 Act barred Chinese laborers from entering the country and prohibited American citizenship for current Chinese residents. President Arthur initially refused to sign, only doing so once the act barred laborers for 10, rather than 20, years. That change made little difference in the long run, though, as the ban was extended in 1888, 1892, and 1902, with more restrictions added as the years progressed.  The 1892 extension, known as the Geary Act, required Chinese residents to carry an identity card at all times; failure to do so could result in deportation or a year of hard labor. The legislation was only repealed in 1943, when the United States was allied with China against Japan, although even then it only allowed 105 Chinese immigrants per year. It was finally the Immigration and Nationality Act of 1965 that allowed for greater Chinese migration to the United States, removing the legislative preference for (northern) European immigrants.

Given its repeated extensions, it should come as no surprise that the Exclusion Act did not alleviate anti-Chinese sentiment in the United States. The brutal murder of 28 Chinese miners in Rock Springs, for example, happened three years after the Act was passed. While the massacre was condemned by newspapers, their coverage also betrayed sentiments that echoed Kearney’s. The Laramie Boomerang, for instance, warned if white men let the “opportunity pass [to demand higher wages] they deserve its results. […] they may as well give up hope, see the Celestials rule and see their families fall to a plane lower than the slaves.” Here again, the threat of laborers working for lower wages quickly expands into demonizing that same group.

The issues the Exclusion Act raised—limiting immigrants from particular countries, refusing those who would be deemed “unable to take care of him or herself without becoming a public charge,” what rights to wages workers have—are still issues the United States struggles over today. President Trump’s administration has sought to make the nation’s immigration policies more restrictive, from attempting to repeal DACA to focusing on immigrants’ country of origin to restricting the nation’s broader immigration numbers. Given that this was a primary issue of his campaign, these policy shifts are understandable and not that surprising.  In the administration’s argument for these changes, however, there are echoes of the dehumanizing language heard 130 years earlier, language that depicts migrants as a threatening horde, coming for jobs and threatening Americans’ way of life. As the movement against Chinese immigrants demonstrates, this can be an effective way to gain support. Yet the consequences of such language are dangerous as well, removing the larger contexts that lead to migration and replacing them with the equivalent of a cartoon depicting migrants as a ravaging horde and, dangerously, removing humanity in the process.