On the Importance of Stories 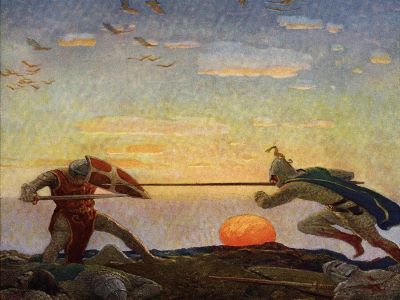 To misquote a former Wyoming Humanities employee: the humanities are our stories. The stories we tell ourselves determine who we are and what we believe. My misremembering of the exact quote causes this to lose some of its immediate effects, yet the truth it contains remains. We find this truth in everything from our national or social identity based on historic stories to the stories we tell our friends about the daily catch on the river, to nearly every self-help guide which advocates changing your situation by telling yourself a new story about yourself, your abilities, or your reality.

We are bombarded by these stories daily. Our ability to tell stories is what many note as a defining feature of what makes us human. From memory to language, from social structure to imagination, the process of story-telling relies on many of our most fundamental human qualities. Moreover, while the technology involved with telling stories has adapted and changed – think movies, news, and the internet – the result is still the same. Our stories define us.

In the Netflix special Sacrifice, illusionist Derren Brown attempts to create a new story from an old, one with a hero who saves the day; a hero he claims may be convinced to sacrifice his life for a stranger. More outlandish, he claims our hero, Phil, will take a bullet for a man our hero has a particularly negative and common story about. In the end, Phil will be led to believe he has a choice to save an illegal immigrant lost in the desert. However, from the outset of the film, Phil makes it very clear he does not approve of or have compassion for immigrants who come to America. Brown notes for a person to sacrifice their own life for someone, a stranger, with whom they do not identify or relate to in any way he must create fearlessness and empathy – through stories.

To achieve this, Brown recruits an unsuspecting volunteer, Phil, for a medical device test. As a part of this story, Brown attempts to create fearlessness in Phil by telling him a story about heroic actions. Brown suggests to Phil that the facetious medical device will give courage. While the viewers are ultimately left unsure about the efficacy of this story, the more impactful story, to both the viewer and our hero, is the story Brown tells Phil about his origins and identity. It is a narrative about the mixed backgrounds of all Americans, one which should be more prevalent perhaps in our national and local discourse.

This moment, or few minutes on screen, also hides another quality for our hero that Brown glazes over – self-awareness. Arguably the foundation for empathy, self-awareness is gaining traction as a necessary skill. While a majority of people would classify themselves as self-aware, shockingly few ever truly are. From this skill comes creativity, confidence, better communication and relationships, and more ethical behavior. We find this in our hero during the time he is given to reflect on the narrative of himself Brown presents.

Brown recreates a modified version of an experiment done by Dr. Arthur Aron. During the original experiment, claimed to make two strangers fall in love, the two individuals take turns asking some questions and then sit quietly staring at each for four minutes. The questions are difficult and require, or perhaps force, self-awareness and awareness of the other. Every taped iteration of this experiment is emotional, heartfelt, and somewhat difficult to watch as we witness how uncomfortable it is for the participants.

It is a truly powerful experiment, love aside, which forces us to slow down and recognize the other person. However, empathy appears here; it is, in fact, difficult or even impossible to love without empathy. For our hero, however, this modified experiment does not have him ask or answer questions about the stranger. Instead, Brown reveals the results of a genetic test done for a fictional medical device and tells Phil he is less “American” than he might believe. Brown explains to Phil that the test shows percentages of Middle Eastern and Central American backgrounds in Phil’s genetic history. Then Phil is seated directly across from an unknown individual, as in Aron’s experiment, who fits the stereotype of a “brown” person, an illegal immigrant, the other. There are no questions or talking, but it is apparent that Phil is beginning to reflect on his new reality.

Here the first story, or act, resolves. Our hero is released from the medical device experiment and sent on his way. However, another carefully concocted story begins in which our hero journeys to an isolated area, is left somewhat alone due to a vehicle malfunction, and thrust into a story which should play into our hero’s old stereotypical negative narrative about strangers. It is here that the viewer’s story reaches its climax and we witness the results of Brown’s attempts at manipulating the behavior and responses of our hero.

There are no spoilers here, and there could be no stronger recommendation to watch this hour-long special than to find out exactly what happens. However, after our climax, we find the resolution, and our third story emerges. It is a story about a different person who, in his own words, states: “I don’t feel like that [hateful] anymore. I want to know other people’s stories.” Our third story, is in fact, the story about the power of our stories and new beginnings.

Sacrifice is a story, perhaps a faked one, about the power of our stories to manipulate us. Brown’s other stunts have been questioned. However, the truth is no less real. While our stories help to create us, we also create stories to fit our reality. During the Wyoming Business Alliance’s November conference in Cheyenne, Wyoming Humanities sponsored Samuel Western, who spoke about the Wyoming narrative and our need to adapt to new ways of thinking. It was the logical continuation of his story Pushed Off the Mountain, Sold Down the River.

With this in mind, Wyoming Humanities embarks on a new year, and we are looking forward to myriad stories from our newly designed grants. We are looking for stories to expand the Wyoming narrative through the humanities; in other words to build and expand on the existing stories we have about Wyoming. By looking at our stories, we can find more common ground than we might believe possible. We can use the humanities to explore our deep love of the very things that make Wyoming, well, Wyoming. We’ll start a new story about the richness and wealth of opportunity our state has within its cultural infrastructure. Moreover, we can contribute to the next chapter of economic growth, new industries, and adaptation among Wyoming businesses.

We do not need Brown and his experiments in Wyoming. Wyoming’s story is rife with history about self-efficacy and defying odds. We need not be afraid of those stories in our past which may cast doubt; for these have still contributed to who we are now. To increase our fearlessness, our self-awareness, and our empathy, we need only examine our old stories and craft new ones. We can become our heroes and heroes to others, and we hope you’ll join us.