“The Brontes had their moors, I have my marshes”: on Lorine Niedecker’s poetry 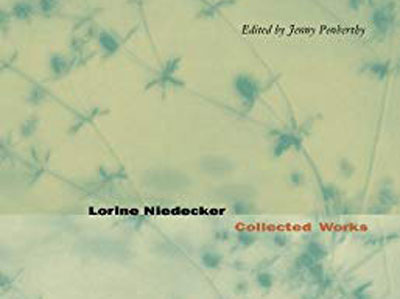 As we head into the calmer end of Spring and the green of early Summer, I find myself turning to the poetry of Lorine Niedecker. While less well-known than other 20th century American poets such as William Carlos Williams, Marianne Moore, or Ezra Pound, Niedecker’s depictions of seasonal changes combined with an abundance of bite-sized poems makes her poetry perfect Spring reading.

Consider, for instance, two of her poems referencing our two most recent months:

Get a load
of April’s
fabulous

For someone who by March is desperately searching for any hint of spring, Niedecker’s brief poems echo my own (and, I suspect, others’) attention to signs that warm days are ahead: the slip of snow off the top of a bird feeder, local fauna’s riot of noise.

Niedecker (1903 – 1970) spent most of her life in Southern Wisconsin, beginning and ending her life on Black Hawk Island, near the town of Fort Atkinson. “The Brontës had their moors,” she wrote to the poet Louis Zukofsky, “I have my marshes.” Many of her poems reflect elements of that rural, marshy life. Scholars have particularly noted her poems’ attention to the requirements of rural living, including the objects that help one do so. Two of her poems, for instance, are titled “To my small / electric pump” and “To my pres- / sure pump.”

While Niedecker celebrates the glory of her marshes (“April’s / fabulous / frog rattle—”), she is also attentive to the hardships that can accompany rural life. In her poetry, rural spaces do not invoke nostalgia or romance but instead, as Becky Peterson writes, force “the reader to always confront the physical and practical world.” A perhaps brutal example of this is a poem that contrasts looks against the necessities of daily life:

That “Ah” may be one of longing, awe, or regret—its multiple potential meanings, to my mind, are one of the poem’s strengths—but the second line’s “but” makes clear no matter how beautiful (or ugly!) the face, other, more practical priorities, must come first.

Yet another poem focuses on a particular solution to a winter challenge:

This poem is one that very much confronts us with the “physical and practical world.”  What is notable here are the feelings—or lack of pronounced feelings—found in Niedecker’s poem. There is not a lament over needing to use said popcorn-can cover, nor a celebration of the resident’s (perhaps Niedecker herself?) cleverness or nobleness for solving the problem. In other words, there is no romanticization of either the challenge of a hole in the wall in winter (ah, how we must pity and/or admire that poor-yet-so-noble resident!) or of the solution. Instead we are given a matter-of-fact and vivid description (cold does mouse in, doesn’t it?) of both.

Niedecker is associated with the Objectivist poetic movement of the 1930s and 1940s, which valued calling attention to the “poem as an object”—paying attention to how a poem looks and sounds—as well as, according to Becky Peterson, “a level of objectivity in representation.” That is, Objectivist poets were concerned with everyday language and life and generally wrote in a style that focused on vivid imagery and mimicked everyday rhythms of speech. The first two poems quoted in this article are good examples of both: “Get a load / of April’s fabulous / frog rattle—” uses everyday language (“Get a load”) and visually breaks up a continuous thought in a way that draws attention to the arrangement of the words on the page. “March” does this just as explicitly, the arrangement of lines mimicking the sliding off of the birdfeeder’s snowcap.

The “objectivity in representation” we see in Niedecker’s poem about cold also extends to her poems focusing more exclusively on the natural world:

A monster owl
out on the fence
flew away. What
is it the sign
of? The sign of
an owl.

Here Niedecker slyly undercuts the poetic convention of reading larger meaning—a symbol, a sign—onto animals or natural events. A monster owl flew away. What does it signify? What could it mean? An owl. No more, no less.

The poems I’ve highlighted here might imply Niedecker was only interested in nature and isolated rural living, an implication that her body of work does not support. While many of her poems focus on that subject matter, others range from her state’s history (“Pioneers”) to meditations on such figures as James Audubon (“Audubon”), Vincent van Gogh (“van Gogh”), and Thomas Jefferson (“Thomas Jefferson”) as well as fellow poets (“If I were a bird”) and Mary Shelley (“Who was Mary Shelley?”). While attentive to her surroundings, in other words, Niedecker’s interest and curiosity encompassed a wide swath of topics.

Niedecker’s poems were highly admired by her fellow poets, but awareness of her work slipped away after her death from a cerebral hemorrhage in 1970.   Niedecker’s Collected Works, edited by Jenny Penberthy, were finally published in 2002. “There’s a tendency when writing about an underacknowledged writer,” argues Elizabeth Willis, “to try to set her up as a kind of hero, but Niedecker is inspiring less in her heroism than in her perseverance—the perseverance of a poet who would not be separated from her cultural and aesthetic sources.” If you’re stuck inside weathering that last Spring storm, spend some time with Niedecker’s poetry, be it individual poems or her collected works. It will be worth your time.