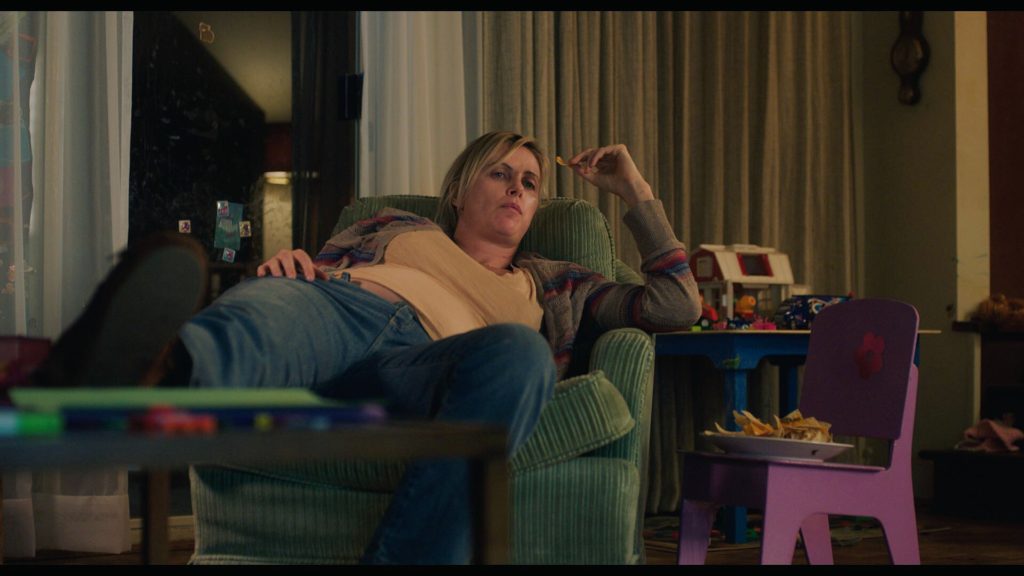 Diablo Cody is probably still best known for writing the breakout 2007 hit Juno, the film that follows the quirky, titular high schooler as she navigates an unexpected pregnancy and her plan to give the baby up for adoption. Cody’s most recent script, Tully, sees her reuniting with Juno’s director and once again examining pregnancy and its aftermath. Here, Charlize Theron plays Marlo, heavily pregnant with a third child, married to a loving but distracted husband, and trying to advocate for a special-needs son. Once the baby is born Marlo exists in a fog of un-feeling indicative of post-partum depression. It is only when Tully (Mackenzie Davis), a night nanny hired by Marlo's much richer brother, appears does Marlo begin to emerge from the fog, seeing in Tully a younger version of herself. As Marlo and Tully spend more time together, their conversations explore Marlo's difficulty reconciling her former life with her current one.

While Tully has been praised for its depiction of early motherhood, it has also come under fire for its treatment of mental health. The film, critics argue, misrepresents symptoms of post-partum depression, which in turn does a disservice to women who suffer from this mental illness. While this is one movie, the debate surrounding it—what motherhood looks like, and how motherhood should be represented to a American culture at large—is part of a long history.

When we think of mothers, we naturally think of family. But the impact of mothers on family was thought of differently in the 19th century than it is today. A prevalent narrative of white, middle-class motherhood relied heavily on the notion of separate spheres: that women were in charge of the domestic, private space, while men were responsible for the public sphere. Moral guidance, in this view, fell under the auspices of the domestic. As Rebecca Jo Plan explains in her book Mom: The Transformation of Motherhood in Modern America, in the 19th century "the American Mother symbolized a virtuous nation; as a social type, her charge was to oversee her children's physical, intellectual, and spiritual development." If men were responsible for the economic development of the nation, in other words, women were responsible for its moral development.

It's worth reemphasizing here that this was a cultural ideal that women—especially white, middle-class women—were encouraged to strive for. Coventry Patmore's poem "The Angel in the House" is an exemplar of this ideal. Originally published in 1854, the narrative poem presents Patmore's wife as a model for all women. This model is one in which the woman is eminently understanding, passive, sympathetic, pious, and loving:
She loves with love that cannot tire;
And when, ah woe, she loves alone,
Through passionate duty love springs higher,
As grass grows taller round a stone.

Here, in a section appropriately titled "The Wife's Tragedy," Patmore describes a woman so loving, so understanding that in the face of her husband not returning her affection, she loves even more, "as grass grows taller round a stone." This is a selfless love, in the face of resistance flourishing even more and asking nothing in return.

Patmore's poem grew increasingly popular over the latter half of the 19th century as this concept of womanhood and motherhood solidified. Indeed, Virginia Woolf described in 1931 how omnipresent that "Angel in the House" was for married women in the late 1800s: "She was immensely charming. She was utterly unselfish. She excelled in the difficult arts of family life. She sacrificed herself daily. If there was a chicken, she took the leg; if there was a draught she sat in it—in short she was so constituted that she never had a mind or a wish of her own, but preferred to sympathize always with the minds and wishes of others." "Killing the Angel in the House," Woolf confided, "was part of the occupation of a woman writer."

If Woolf viewed the Angel as holding her from her writing, historians have traced how women used the virtuous status conferred to them by society to push for societal changes. Women, as the family's moral authority and the embodiment of moral purity, were (they argued) ideally placed when it came to social reform efforts, including temperance societies, penitentiaries, and asylums. In the name "of protecting the home," sums up Rebecca Jo Plant, "women increasingly ventured beyond it."

The 20th century also saw increasing scientific interventions in motherhood, with a resulting sharp decline in infant and maternal mortality. These interventions included immunizations, antibiotics, and milk pasteurization. Historians have also highlighted the negative consequences of the turn to what has been termed "scientific motherhood." "Scientific motherhood," writes Jodi Vandenberg-Daves, "and its counterpart, psychologized motherhood, devalued motherhood in general and vulnerable mothers in particular." In place of the 19th century's selfless, nurturing maternal love was a damaging one. Women were accused of "Momism," "an excessive attachment to, or domination by the mothers," or of being a "refrigerator mother," whose "absence of love for her child caused the child's autism."

These accusations, we can imagine, did nothing to help already struggling mothers. They are also indicative of a shift in the cultural view of mothers noted by Rebecca Jo Plant: rather than embodying a broad moral authority, now motherhood was an individualized, "private experience and a single (though still central) component of a more multifaceted self." This shift towards a conception of motherhood as a private experience was especially marked after WWII. In the following decades, conversation around motherhood echoed some of Woolf's dismay with the Angel in the House. Betty Friedan's famous The Feminine Mystique (1963), for instance, identified "the problem that has no name": (white, middle-class) women's unhappiness with their lot in life, despite being married with children.

Recent pop culture depictions of motherhood represent both its joys and frustrations. The R-rated comedy Bad Moms, for instance, celebrates three women who rebel against a culture of "perfect moms" they encounter at their children's school. These "perfect moms" bake gluten, sugar-free goodies for the bake sale and never miss a PTA meeting, portraying an effortless form of mothering the film's protagonists find exhausting and impossible. A conversation at the end of the film's (swear-filled) red band trailer gives a good example of these women's struggle. "It's impossible to know whether or not you're doing a good job," declares Kristin Bell's character. And maybe their children could be doing better. Kathryn Hahn shares that her middle school-aged son "still watches Sesame Street. And he doesn't get it!" "My son failed study hall," admits Mila Kunis's character. Yet the listing of their children's faults quickly shifts to declarations of love: "F*** I love them so much." "Every time I think of that dumb [expletive] going off to college I cry like a baby."

These characters are still negotiating that scientific motherhood: following a mother's intuition is out, so how do you know if you're doing anything right? But if Friedan highlighted in the 1960s the lack of satisfaction many women felt in their roles as mothers and wives, this film (among others such as Pamela Adlon's television show Better Things) highlights in popular culture the complicated, conflicting feelings that surround motherhood. Kids, it turns out, are frustrating, often not that smart, and very often don't do praiseworthy things. Knowing that doesn't preclude loving them. Both those statements are true, although pop culture depictions of motherhood are just beginning to explore them simultaneously.

The critique surrounding Tully's depiction of motherhood and mental health is certainly valid. Yet I wonder if thinking of the film less as a realistic depiction of post-partum depression and more as a dramatic meditation on how motherhood does and doesn’t change someone might be more productive. By viewing it this way, we can place the film within a larger cultural context of narratives about motherhood: what mothers (often, white, middle-class mothers) should and shouldn't be, and what mothers should and shouldn't feel. The more stories we get—be they comedies, dramas, or somewhere in between—the more options we see for what motherhood can look like. There isn't, after all, one right way to be a mother; why not let our pop culture reflect that?