Libel in Heart Mountain: A University of Wyoming Mock Trial 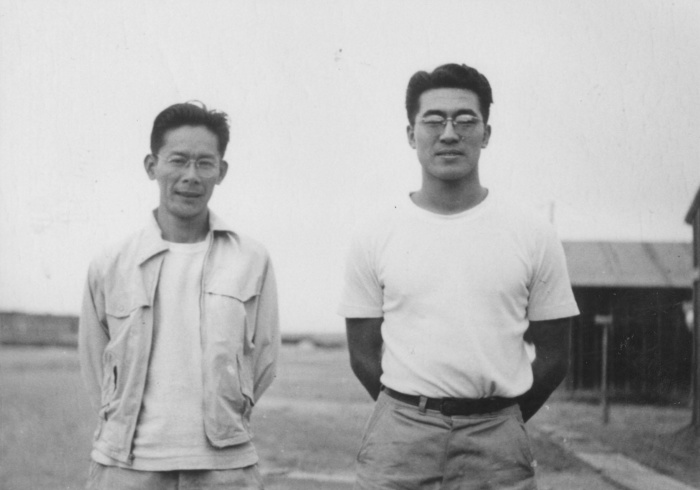 On Monday, April 10 at 6:30 p.m. in the College of Law room 178, the University of Wyoming Law School will hold its next mock trial. This event kicks off a week of programming related Heart Mountain and immigration. This year’s trial is a timely and emotive case involving World War II internees at the Heart Mountain Relocation Center. Like all the mock trials, this never occurred; but it could have, and in this way is the epitome of the humanities in actions. Using historical facts, real laws, and a bit of imagination, the students presenting the case will explore how we understand specific instances in our history.

The trial will be judged by Sen. Al Simpson and ruled on by a jury based on the evidence presented by the law students. More than that, it will ask the audience to “take a closer look” at our judicial process.

The case is not as simple as the charge portends. Frank Emi, a leader of the Fair Play Committee, is suing Nobu Kawai1 for libel because of the editorial Kawai wrote about the draft resistance movement that was published in the Heart Mountain Sentinal.1

At stake, in this case, is the larger issue of First Amendment rights, slander and libel protections, the right to assemble and protest, and, perhaps, the impact of external variables on the judicial process itself. The case, as we know it, has nothing to do with the legality of Executive Order 9066, which authorized the mass incarceration of 110,000 Japanese Americans who lived on the West Coast. And yet, how will this fact play into the case?

More importantly, what echoes of this fictional case can we find in our current world? The issue of libel is making current news almost daily. Along the same trend, we are testing the bounds of the First Amendment as state lawmakers in many states have looked to limit or assign responsibility for protests that turn dangerous or violent. While we have plenty of examples of both peaceful and violent protests in our recent past, opponents claim such laws infringe on the First Amendment while supporters look for a way to prevent crime and protect public safety.

The First Amendment was first. At its core, the amendment addresses the inalienable rights we have, even need, as human beings to be “free.” Our freedom to publicly debate our opinions and beliefs despite disagreements is the foundation of democracy. It is the one freedom that supports all our other freedoms.

In 1964 during another period of our history, the Civil Rights Movement, one of the most famous libel cases, New York Times v. Sullivan, was presented to the U.S. Supreme Court. At issue was not an editorial but an “advertorial,” a paid editorial that called the policing actions against the Black community “an unprecedented wave of terror.” L.B. Sullivan sued the Times for printing the ad but was ruled against. The Supreme Court ruling stated our “profound national commitment to the principle that debate on public issues should be uninhibited, robust, and wide-open.”

But the Civil Rights Movement was 20 years after Heart Mountain. So based on the premise of this case, it will not have any bearing on Heart Mountain. Nevertheless, the Heart Mountain case is about civil rights as the Fair Play Committee argued their protest was as well. But the fictional case could be about the cultural differences; some argue patriotism, and perhaps generation differences found in the Japanese American’s of WWII. In the end, it is not wholly dissimilar to the Civil Rights Movement and Times v. Sullivan case.

During WWII, 63 members of the Fair Play Committee would be arrested on charges of draft resistance, including Frank Emi, and sentenced accordingly during a trial in Cheyenne, WY. They were fully pardoned in 1947 by President Truman. But it was not until the year 2000 that a formal apology by the leading Japanese society, the Japanese American Citizens League (JACL) would be issued.

For JACL, the right thing to do was to prove loyalty to the United States. In fact, the publisher of the Heart Mountain Sentinel was an active member of the JACL. And yet, during this case, he will be called as a witness for Frank Emi.

During the WWII, EO 9066 was upheld by the Supreme Court. The validity of the order set a precedent for the treatment of Japanese Americans during the WWII.  It would set the path for the inclusion of Japanese Americans into the Armed Forces but also for “loyalty tests.” The tests would result in the change of draft status for Japanese Americans from 4-C “Alien” to 1-A “Available for Service.” This change would help fill the ranks of the 442nd Regiment. It stands as the most decorated unit in American history. While back home many paid the price for protesting all of this. In this way, both protesters and service members were protecting and fighting for our rights.

After the war, the longer battle of determining freedoms was continually addressed. President Truman signed a bill in 1948 allowing for Japanese Americans to file claims for damages because of EO 9066. Much later in 1988, President Reagan signed the Civil Liberties Act of 1987 providing a redress for survivors, and an official apology to all Japanese Americans for “racial prejudice, wartime hysteria, and lack of political leadership.” In 1990, President Bush would present the first check and formal apology as well.

To some degree, Frank Emi must have felt vindicated prior to his death in 2010. He would survive the internment, as most did. He was pardoned and given an apology. Sen. Daniel Inouye, a member of the 442nd and Medal of Honor recipient stated in the 2000 JACL apology: “Some young men answered the call to military service, and they did so with honor and with great courage. Some young men chose to make their point by resisting the government’s order to report for the draft. They too were honorable and courageous.” His civil disobedience and exercise of First Amendment rights had finally fallen on the right side of history.

1 Editorials in the Heart Mountain Sentinel were anonymous. The name has been fabricated for the purposes of the trial.