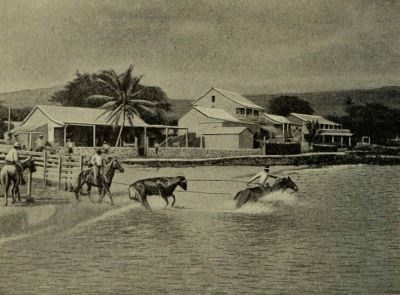 Summer in Wyoming means rodeo season. Speaking to C-SPAN, Sheridan Mayor Roger Miller noted that the entire city operates around, with, and for the rodeo during the Sheridan WYO Rodeo. History was made just recently at the Cody Stampede. Rodeo and the West are synonymous with each other.

And while this western cliché may always hold some truth and will undoubtably remain an important part of Wyoming and our economy, there is more to this history and it serves as a reminder for all of our conversations in the humanities and our society. One about the power of language and the language of power.

Consider the influence of the Spanish on the entire vocabulary of the West. The renegades and vigilante gangs that chased them, the lasso used to tie them up, and the saddle ridden in the West were all influenced by the Spanish. Yet rarely, if ever, is this heritage embraced. Even more obtuse to the history of the West and rodeo is the Paniolo.

Well before the West had been ventured into, in February of 1793, Capitan George Vancouver of the HMS Discovery unloaded 10 longhorn cattle on Hawaii. Here they would proliferate until the 1830’s when King Kamehameha III recruited a few vaqueros from California to help manage the cattle and turn this into resource into an export for the island nation. This led to the emergence of the Paniolo, the Hawaiian cowboy. As the authors of the new book Aloha Rodeo write, the Paniolo faced challenges that made the West seem easy – lava fields, sharks, fatal bullock pits camouflaged into the jungle. In 1903, after the American annexation of Hawaii, Eben Low, owner of the Pu`uwa`awa`a Ranch, sent three of his best men to Cheyenne to prove the Paniolo could best the West – and they did.

Despite adopting the Spanish vocabulary for the West, the West also used language to discriminate. The Paniolo were called interlopers; the spectators at Cheyenne Frontier Days believed they did not belong with their bright and colorful outfits and dark skin. And while the Paniolo would win the overall championship, it would not be until 1999 when history would begin to recognize these three and their contributions, and only more recently has this history been “brought to the mainland and received the attention it deserves.” In effect, a lack of language – of storytelling or use of language – kept the Paniolo from the attention they deserved.

For the Paniolo, the language of power used determined they were not wanted and did not belong; as the saying goes, “History is written by the victor.” Through the power of language, history had left them behind. Without their stories being told, being written down, and passed along, fewer still knew they had even existed. It is a simple but plain example of how power can be used to maintain the status quo, create homogeny, and trivialize the other.

A more recent example is seen in an episode of Yellowstone as the character Monica Dutton, a Native American history professor, arrives at her first class. Before starting her class, a student begins making lewd comments towards her. She responds to the student by noting if he can “work in a Pocahontas joke, you’ll hit the trifecta.” She then asks him to define power but continues before he can respond. “It’s the ability to direct or influence another’s behavior or course of events.” She notes his lack of power within a classroom as she can fail him and influence his future.

Without pause, however, she continues reading from the journal of Christopher Columbus about his meeting of Arawak people in the Caribbean:

They willingly traded everything they owned. . . They do not bear arms, and do not know them, for I showed them a sword, they took it by the edge and cut themselves out of ignorance. They would make fine slaves. . . with fifty men we could subjugate them all and make them do whatever we want.

She then asks the student, “Do you ever feel like that Trent? Do you ever feel like making someone do what you want?” Monica Dutton is a minor character. Her speech is a tool foreshadowing the events of the major characters, alluding to the larger battles which will be fought in the show. It is a jab at what she calls the European mentality that stems from government, religion, and power structures dating back colonial times. And, it is a constant reminder of the treatment of all native peoples by the English, Spanish, American, and others – also, a smaller theme within the show. But, in the 21st-century, it is also a reference to the issues of power we find in our everyday lives. The treatment of women, minorities, and all those labeled as interlopers within our society by one or another group – the power of language which leads to actions.

We use language in a not dissimilar way to Columbus; primarily because we also speak English, but also because our language becomes our actions. In this phenomenon, first identified by Terry Winograd he states: “People act through language;” which is to say how we use language determines our how use information in decision making, and ultimately how we choose to act on that information. In this way language can be come more powerful than simply ignoring events in history or labelling people and cultures as “other.” This is exactly what the Europeans did for centuries. And it is not a problem of the chicken and egg, someone first came up with the idea to enslave people and communicated this before it happened – the power of language to make someone other than.

Our language and how we use it has the power to change our perceptions of time, color, and space. More recently, the power of language however has taken center stage for abilities to initiate crimes and violence. Following in the wake of the El Paso shootings, the reclusive website 8Chan was shut down. And while the websites role in the violent acts may be disputed, it serves as a small example of how isolation imbibes limited points of view, can result in distorted viewpoints, and the harm the restriction of information can cause. It is just as true in terrorism camps overseas as it is here in America.

For Columbus and the indigenous populations of North and South America, the power of Columbus’s words subjugated people, subjected them to genocide, and forced them to the edges of existence. A path which otherwise might have been avoid had he (and others) spoken about them with respect as equals. For us, today, the power of our words is just as dangerous — the difference between life and death for our children and for adults – toxic or harmful work cultures are just a widespread.

How we speak, what we write, and, just as important, what don’t say and write is about more than just our history. A fuller, richer, and honest story of our past can only add value to who we are, what our celebrations and iconic events are about, and the possibilities of us as humans, the power of language is about of very being. If we take this away from people, we are subjugating them to our will and removing their freedom…could there be anything less American than removing freedom?

This is our past and power of the humanities. From the unexplored events and cultural influences in our famed legacies to the covering up of historical atrocities for the sake of progress. As it was then, we do so out of fear and as we fear the loss of power we seek more. But what is there is to fear? What would it mean to Cheyenne Frontier Days to have embraced the Paniolo for nearly a hundred years? What might our nation be had we embraced the unique differences found in hundreds of native people’s cultures? What can our future be if we speak about each other with kindness and acceptance?

Monica Dutton ends her monologue with this about the past “… that was the mentality of the men who ‘discovered’ America, and it’s the mentality our society struggles with today. What you know of history is a dominate cultures justification for its actions. And, I don’t teach that. I teach you what happened to my people and to yours. [Be]cause we’re all the descendants of the subjugated, every one of us.”