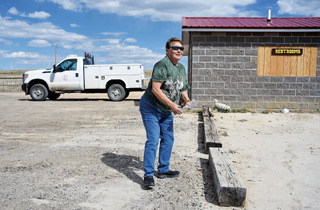 Marcia Ireton picks up litter at Bartling Park on April 8. Since last year she has been making daily trips to the park and the fairgrounds, with her two dogs, to find and remove litter.

Marcia Ireton leans down and picks up a dirty, discarded mask from the ground. While it may have helped to save someone’s life in the past, now it’s just litter.

Then she spots an empty plastic bottle, then a piece of cardboard. She eagerly picks both of them up, looks up and around and continues to scout the area for other trash.

As she walks the grounds of Bartling Park, she amasses a small collection of detritus to properly dispose of.

Since last year, Ireton, 72, has been making nearly daily trips to both Bartling Park and the Wyoming State Fairgrounds – with her dogs Samantha, 11, and Cocoa, 15, in tow – to clear the areas of trash.

“These are the things to keep me going,” she said. “If you just sit around, your mobility goes.”

But the exercise and fresh air may not be the only factors driving Ireton out of the house. Cleaning, and keeping things neat and organized, is part of her identity.

Before retiring, she worked for 16 years as a housekeeper for Wagonhound Land & Livestock, keeping owner Art Nicholas’ house and grounds clean and up to snuff.

She has also launched her own cleaning service in town called Professional Cleaning, aimed at cleaning the houses of people who have recently sold them before the new owners move in.

But above all, she’s proud to be a Douglas resident, and she takes great joy in keeping the public areas of the town clean.

Her dogs have also been known to goad her on.

“If I don’t do it, then the dogs start to look at me,” she says with a laugh.

Her efforts have not gone unnoticed. Ireton has also helped clean and take care of the new restrooms on the north side of the park near the skatepark.

“We do appreciate her help; we enjoy having her company,” said Mike O’Brien of the Douglas Parks

Department, as he did maintenance work on the restrooms April 8.

Though she is married, Ireton typically goes on her trash pickup outings with just her dogs.

“He keeps busy,” she said of her husband, Donald, adding, “He thinks it’s great.”

So far she claims to have not found anything super interesting or noteworthy in the litter at Bartling Park or the fairgrounds.

But sometimes she’ll come across dimes or quarters, “so I’ll get a tip,” she concedes with a sly smile.