Hemingway in the West 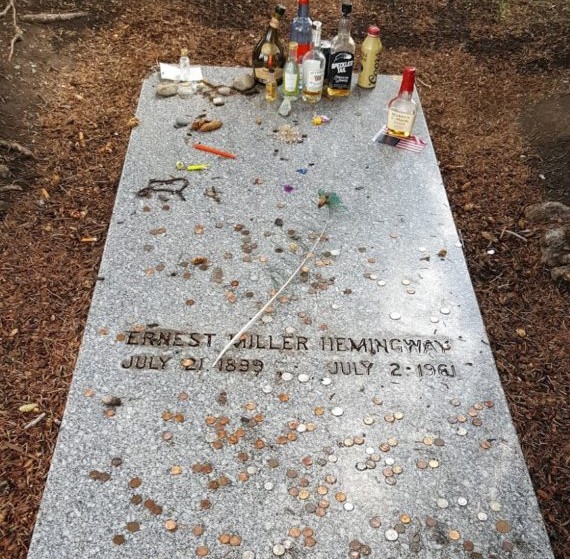 In early July, I passed through Ketchum, Idaho and took some time to explore Ernest Hemingway’s history there. Hemingway was an avid sportsman who spent a good deal of time in the Rocky Mountain region hunting, fishing, and writing. He was living in his home of just a few years in Ketchum when he committed suicide on July 2, 1961, and he is buried in the Ketchum cemetery where people make pilgrimages to leave totems (and alcohol) on his grave as seen in this photo.

Lately, I’ve been spending a lot of time reading Hemingway’s work and familiarizing myself with his life. That’s because, about a year ago we began a three-year project in partnership with Sheridan College, Ucross Foundation, and UW’s Wyoming Institute for Humanities Research to commemorate Hemingway’s connections to Wyoming as he left a well-documented trail detailing his passion for the landscapes of this state. In 1928, he finished his second major novel, A Farewell to Arms, at Spear-O-Wigwam, a guest ranch in the Bighorn Mountains west of Sheridan, Wyoming that is now managed by Sheridan College. In 1930, he published “Wine of Wyoming” in Scribner’s Magazine, a short story about a culture clash between a French immigrant couple and crass, insensitive locals in a community that is clearly meant to be Sheridan during prohibition. These are but a few examples of his many experiences in Wyoming that we intend to share.

Funded by a three-year “Creating Humanities Communities” challenge grant from the National Endowment for the Humanities, the project will explore Hemingway in Wyoming and his impact on the world. The initiative will use the attraction of Hemingway’s image and work to explore the impact great writing can have in society.  A number of planned events explore themes associated with Hemingway; thus, Hemingway will act as a springboard or cartographer of imaginative geographies that will help us establish and deepen connections among communities in Wyoming. We plan to have a “Hemingway Highways” tour of Wyoming available online and through a popular smartphone app by Wyoming-based TravelStorys. We are also working with the Wyoming State Library to host a state-wide read of a collection of Hemingway’s short stories.

So far, I’ve read A Farewell to Arms, A Moveable Feast, and For Whom the Bell Tolls. My next book will be an anthology of short stories that includes “Wine of Wyoming” and then I move on to The Old Man and the Sea. I expect to continue reading Hemingway and learning even more about his work because at the July biennial meeting of the International Hemingway Society in Paris, they announced that the next conference, in 2020, will be held in Sheridan! This is in no small measure due to the incredible work that the partnership of Sheridan College, Ucross Foundation, UW WIHR, and Wyoming Humanities has done to date. The Hemingway Society was effusive in their praise of the powerful proposal they received from Sheridan College and the community of Sheridan with support from statewide organizations like ours—it was a highly competitive process. “Hemingway in Wyoming” is a perfect example of Wyoming Humanities’ work—we are a “force multiplier” and bring organizations together to collaborate and stretch their capacity. We are proud and honored to be a part of this important and impactful project. I hope you will join us in reading and learning more about Ernest Hemingway.