"Hearts of Glass" to Tour Wyoming 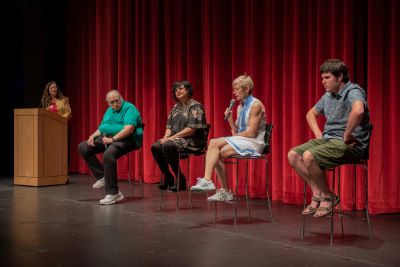 On June 1, Wyoming Humanities cohosted the premiere of the documentary film, Hearts of Glass, to a standing-room only audience of enthusiastic supporters at the Jackson Center for the Arts. The feature-length documentary about a big idea from small-town Wyoming has been traveling the film festival circuit from California to New York in recent months. Praised as “a breath of fresh air – inspiring, heart-warming and joyful” by the Wild & Scenic Film Festival, the documentary by Wyoming-based JenTen Productions follows the exciting – and at times tumultuous – first 15 months of operation of Vertical Harvest. Vertical Harvest is a state-of-the-art hydroponic greenhouse that grows crops while providing meaningful, competitively-paid jobs for people with disabilities.

Along with our council and JenTen Productions, the premiere was hosted by Slow Food in the Tetons and Cultivate and brought a great audience to the Center to hear the results of Tennican’s filmmaking efforts. Wyoming Humanities Executive Producer Emy diGrappa hosted the Q&A with director/producer Jennifer Tennican and several stars of the film after the showing. “For me, Hearts of Glass represents a once-in-a-lifetime opportunity to share a story of possibilities unfolding in my own backyard,” Tennican said. When you see this film, “prepare to be transported. This is as close to being part of a high-tech agricultural startup and social experiment as many of us will ever get. I believe it will challenge your perceptions about abilities, the benefits of meaningful employment, and the power of inclusion.”

Hearts of Glass had its world premiere at the Wild & Scenic Film Festival in Northern California in January. It has since screened at film festivals on both coasts and in the Midwest, with audiences praising its intersecting themes of social entrepreneurship, sustainable local food production, disability advocacy and community inclusion.

Wyoming Humanities is proud to have helped fund the film during its various stages of development, including pre-production, post-production, and the development of a viewer’s guide that contextualizes the film within disability studies, ethics, social sciences, and environmental humanities. Most recently, we awarded JenTen Productions and the National Association of Councils on Developmental Disabilities an Expansion Grant to host a statewide screening and discussion tour. The tour will begin this fall and, along with a screening and discussion, panelists will also meet with college students to continue discussions begun at the screening. Check out which stop will be closest to you: