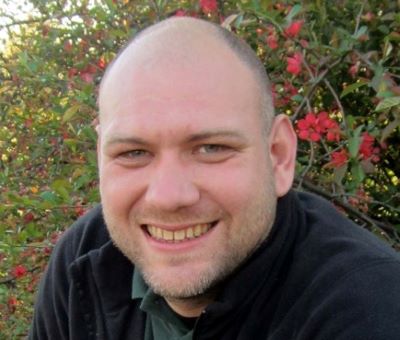 We sat down to chat with Dakota Russell, interim Executive Director of the Heart Mountain Wyoming Foundation, about the importance of using history to start conversations and Heart Mountain’s Wyoming Humanities-grant funded tour and exhibit with the No-No Boy Project.

You can catch No-No Boy’s multimedia concerts in Cheyenne on Oct. 8 (6:30 pm at the Laramie County Library), Laramie on Oct. 10 (7 pm at the Buchanan Center for the Performing Arts), and Rock Springs on Oct. 12 (7 pm at the Broadway Theater). They will also be performing in northwest Wyoming in the spring of 2019 and curating an exhibit on music at Heart Mountain that will open in May.

For those who are unfamiliar, what’s the background and goal of the Heart Mountain Wyoming Foundation?

The Heart Mountain Wyoming Foundation began with the idea of not only preserving the site but also preserving the story. Because, for so long the story of Japanese American incarceration has been forgotten or ignored, simply because people were uncomfortable with it. It was a dark chapter in American history, during a time where we were supposed to be the unqualified good guys. And so this story did not get the attention it really needed to have. And it wasn’t until these folks became older they started to realize that “we’ve got to do this, not just for the preservation of history, but to make sure this doesn’t happen to anyone else ever again.”

So those were the tenets of the Heart Mountain Wyoming Foundation was founded on, to not only preserve the site, but also to make sure the story continues to be told. And that goes not just for present day adults, but education for young people. We talk a lot in our mission about the fragility of democracy and we like to think of ourselves as a forward-facing museum that is not just looking at what has happened but looking at how we can use what has happened to inform our understanding of what’s happening today.

When I came in to the interpretive center, I heard one of your staff people saying to some visitors that a major difference between here and say, the Manzanar site, is that Heart Mountain is told from the point of view of Japanese Americans, perhaps in contrast to others that are managed by the National Park Service.

Yes. Some of the members of our advisory council when we were building this place had also been on the advisory group that reviewed Manzanar’s exhibit when the National Park Service was setting it up, and so they sort of took their lessons from Manzanar and applied them here. And one thing they talked to me about was that when they came here and were setting out to do this they wanted to make sure that people knew it was them telling the story. Because they felt that while the National Park Service was very open and considered a lot of their input, the NPS also was always going to tell the government’s story and tell it from the government’s point of view.

And so they decided “we want this from our point of view.” And that became a very real thing in our exhibit; if you’ve been through, you know that our exhibit is in the first person. It probably distinguishes us from about every other museum. It’s a smart move and it’s a sly little trick, because even without realizing it, the empathy is sort of embedded in there. It’s hard not to walk out of the museum after going through the whole exhibit and not feel like you’ve been in conversation with someone. It makes the whole thing a much more intimate experience and more powerful.

That gets into the grant you guys were just awarded, in terms of storytelling and history. You guys are bringing in a musical group, No-No Boy. What are you doing with them?

Julian Saporiti started No-No Boy as an extension of a much more academic pursuit that he was working on; he’s just now finishing up his doctorate at Brown University. He did his undergraduate work at the University of Wyoming. And as an Asian American in Wyoming—Julian’s Vietnamese American—he was drawn to other Asian American stories in the West. And so he learned about the existence of Heart Mountain and he kind of got enraptured with it. When he went to do his doctorate work he continued along those lines and he’s been traveling around the country interviewing former incarcerees, collecting oral histories, and he came to realize that maybe academic writing was not the best way to represent this story. So he fell back on his old life which, before he had gone the academic route he had been a sort of indie rock star as the front man for The Young Republic.

He decided this was the way to get his research out there and connected to people—to take these interviews that he did and start writing songs based on them. And so he pulled all of these loose threads together from the various people that he talked to and began this multi-media show, where it has slide projections behind him and he talks, of course, a lot about the Japanese American incarceration experience, but he also goes into larger themes beyond that. During the show he’ll take breaks where he converses with the audience to talk not just about this story but also about his own family’s story; his family were refugees from Vietnam. So there’s a larger story going on, not just about the Japanese American experience, but also about the larger immigrant experience in the United States and what that’s been like.

And in his travels Julian ran across another student at Brown, Erin Ayoama, and Erin’s grandmother was actually here at Heart Mountain. So he invited her out when we were doing a concert out here, actually in our barracks. And it was just really really powerful for everyone involved, so that sort of sealed the band.

This fall they’re setting out on a national tour. And, as part of this grant, we’re fitting part of that for them to come to Wyoming and play some dates. And not just public shows, but also get them out to the high schools in Wyoming, which I think is really really important because we have schools that are very daring in traversing long distances to get to us; we’ve got groups that come up from Casper every year!. But Wyoming’s a big state and it’s not always feasible to reach out to everybody. And I just think what Julian and Erin do is such a different way to present this history and is such an invitation to learn more for especially young people.

Since you’ve seen them in concert, what is it about the music that makes this history more accessible? What does the music do for this telling of history?

I think that what makes it powerful is not just the music itself, although the music itself is great, but the songwriting is informed from a very personal place. It is Julian having gone around and not just pulling this from a book, but having pulled this from real people he’s been in conversation with. And so when he talks about songs he can say, I got this bit from this person, and this bit from this person, and we met through this circumstance.

A lot of what’s going to come out in the exhibit in May—our exhibit talking about music at Heart Mountain, which is part of this grant as well—is through this main figure of Joy Teraoka, who when she was 15 years old was the singer in the George Igawa Orchestra, memorialized in Julian’s song “The Best God Damn Band in Wyoming.” It’s about them being the only dance band left in Wyoming, because everybody had gone off to war. And so they were able to get out of camp because they were needed elsewhere. They even went down and played the Thermopolis prom. But Joy was the singer in this. So a lot of Julian’s songwriting comes from his conversations with Joy about what it was like to be 15 years old and suddenly not just in this band, but touring Wyoming as some of the only Asian Americans these people had ever seen.

They actually went out to Hawai’i this past summer and spent some time with Joy, interviewing and recording with her. And they did a live show for families of the 442nd battalion, which was the segregated Japanese American force of the US Army. They also were shooting footage out there, so as part of the exhibit we’ll be cutting together a 15-minute story of Joy’s life that will be the video portion of the exhibit. She’s going to be the identifying character that leads us through this story. We’re really excited about that.

As you mentioned earlier, you’re a forward-looking museum in a lot of ways. The exhibits certainly talk about that, about how democracy is fragile, and how we need to think about these issues. I was really struck by the comment cards you guys had posted, in which there were very different points of view expressed about the incarceration. Some folks wrote that the incarceration was terrible, and other folks wrote that these internees had health care and dentists while other Americans didn’t. How do you respond to such different points of view?

The big thing that I try to talk about when I get pushback on it is that there are areas where we can all agree on this. It does bother some people that we take it up to the present day. We talk in our exhibit about what was happening to Muslim Americans after 9/11. We talk now about the detention centers for immigrants that are going on.

I think we have a real vested knowledge in not telling people what to think, but reminding people that historically, immigration law has always been informed by race. And that’s something Asian Americans have gone through since their arrival in this country. That really why immigration laws were created, because of Asian Americans! We really didn’t have any laws before the Chinese started to immigrate here. And I think it’s important to talk about that and acknowledge that historical reality, which I think most people are willing to do.

And I think the other thing we can all agree on is that the questions of individual liberty versus national security that came into play during WWII are still questions that we are wrestling with now, and they’re not questions that have easy answers. And I don’t think that as a Foundation we’re pretending that they do. But I think as a Foundation we have a responsibility to make sure that the public makes informed decisions about it. And informed decisions mean making sure this history is out there, making sure it’s understood, because we need to know what happened in the past if we’re to make informed decisions. And I think that we want to be a forum for those discussions to happen.

When I’m going through those comment cards deciding what to stick on the bulletin board, I always try to pull some from all different angles, including from the people who vehemently disagree with everything they saw. I want people to feel like they can come up to one of our staff and start that dialogue. I think too many times what happens is that dialogue never gets started. People come, they get upset by something they see in the exhibit, and they leave. I would much rather they come and talk to us, so we can begin that dialogue.