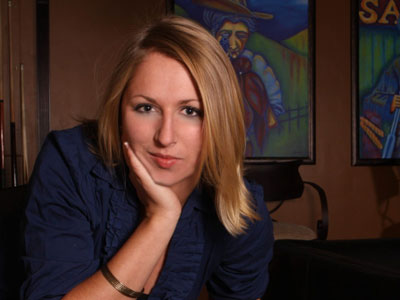 We sat down to chat with Anne Mason, Founder and Producing Artistic Director of Relative Theatrics, about the importance of theater in a community and Relative Theatrics’ Wyoming Humanities-funded grant program, “Read, Rant, Relate.”

You can catch the next “Read, Rant, Relate” Thursday, Sept. 20 at 7 pm in the Relative Theatrics Studio (710 E. Garfield St.) in Laramie.

For those who don’t know, what does Relative Theatrics do?

I’m a native Laramite, born and raised here, went to college here and always knew I wanted to have a theater company and it would be great to have a theater company in my home, but thought that it wasn’t really feasible.  So after college I left, but came back in 2013 for what I thought would be a temporary stint. While I was here I thought might as well try and see what happens, so I produced the first Relative Theatrics show in August of 2013 and for the next two years I continued to produce, but it wasn’t a set season. It was more of a “oh, I have time in the next four months, let’s do a play.”

We became a non-profit in February of 2016 and that’s when we really buckled down as an organization to plant roots and be a staple for the community.  At that point we really established our mission: “to present thought-provoking theater that examines the joining qualities of the human race. Taking artistic risk, we provide a community gathering place where thoughts can be exchanged about society, culture, and the power of creativity.” That’s when we started building a subscriber base, and really cultivating a standing here in Laramie to give back and present these contemporary plays that weren’t programmed in Laramie on a frequent basis.

That seems like something that distinguishes Relative Theatrics from other theater companies in the area—that you’re really focusing on contemporary plays?

Yes.  Our tagline, “Risky, Relevant, Real” really speaks to the vein of theater that I’m selecting in the season selection process. Plays that are contemporary, both in the ways that they’re written and the ways that they speak to today, in the ways that they’re relevant to society today, to present-day issues, to experiences or problems that human beings in 2018 are grappling with. And the “Real” part of the tagline is really about showing life as it is and not being afraid to take those risks and put something on stage that’s challenging.

Is there a play or a program that you’ve done that really gets at that, or one that sticks out in your memory?

Definitely my favorite plays that I have done are the ones that fit so fully into that. I would say we did The Nether by Jennifer Haley last year and it was about internet legality when it comes to role-playing and pedophilia.  So it was really dark, challenging material, but a thrill to be a part of and to see the discussions that occurred out of that.

We also did a play called What Would Crazy Horse Do?, which was about a fictional native tribe that was essentially going extinct. There were two living members left and they were twins, so there was no chance of the bloodline carrying on and they were contacted by an underground chapter of the KKK. So, it really explored the ideas of racial purity and preserving a bloodline and in what instances are those strides necessary and in what instances are they detrimental.  These are the pieces that are the really, really hard-hitting ones that I love. What Would Crazy Horse Do? hardly ever gets produced because it’s difficult to find Native actors. So many theater companies shy away from that. We actually had a really wonderful story on National Public Radio about that, with Larissa Fasthorse, the playwright, on the strides that it takes to cross cultural bounds and to reach out to others and to collaborate and to learn the language of another group of people.

So Relative Theatrics has for three years won Wyoming Humanities grants for your program “Read, Rant, Relate.” For those who are unfamiliar with it, what is this program?

One of my goals as a theater artist is to read a play a week. Which is pretty feasible, because a play is self-encapsulating; you can sit down and digest a whole story in the course of, on average, two hours. For me, theater should be a catalyst for conversation. It should ignite thoughts, and get people talking and reaching out and grappling with ideas and working through things through discussion. While we follow all our full productions with chat backs, I also thought there are easier ways to create these opportunities for discussion. One of the easiest ways to do that is through readings.

So “Read, Rant, Relate”—we call it a book club, but with scripts. We have a select number of plays […] and we get actors who read the roles out loud. So you’re getting a reading of a play, and then we have a humanities scholar proctor a discussion about that play. It’s a nice, easy way to understand the bare bones of how to read a script and an ability of how to digest a story in an evening and talk about it.

The one you guys are doing September 20 is “Bright Half Life.” What is that play about?

So for this year—this is the fourth play of our current cycle—I selected plays that all deal with “time” in an interesting storytelling capacity. And I would say of the four “Bright Half Life” is my favorite.  It’s a love story.  It’s the story of a modern day, biracial lesbian couple, told across the span of their relationship, from when they met, started dating, got engaged, got married, had kids and ultimately to when their relationship ended. I feel like it’s safe to say that, not giving anything away, because the story is told disjointed in time. So in the first three pages you see an early stage of their relationship and an end of their relationship and it just jumps around with these different scenes of points in their relationship and then goes back in time and shows those scenes again, but they’re cut in half, where pieces have been taken out.  It gets down to the heart of each scene and the essence of it, examining what it means to be a modern day gay couple, and having kids, but ultimately what it means to be a human being in love and in a relationship.

You yourself take part in the performance of “Read, Rant, Relate” plays. As an actor, is there a difference between a live reading versus a fully staged performance with costumes and scene changes and things like that?

So you go through all of these ups and downs in a full production. And what “Read, Rant, Relate” allows is just focusing on that first part: understanding the words and bringing that to life. In many ways, I think it’s more appealing, especially for older actors who don’t have to worry about memorization or busy actors, who have so much more to do in their lives. They can simply say, ok, I’ve got these 2-3 rehearsals before the performance and I can just focus on it and get that “quick fix.” And I think it’s a nice reminder for actors to always go back to the text. That that’s the seed of it. And that’s, as an actor, what we should be honoring. Yes, it’s necessary to have our own interpretations, but ultimately it all comes from the text.

I’ll sometimes act in the readings, but more often than not I’m reading the stage directions, which is really fun also, because especially in contemporary plays, playwrights are giving the stage directions a voice of their own, more and more.  Which is something that you don’t get when you go to a performance. You see how an artistic team has interpreted those directions, but you don’t know what those directions are. So in a reading you actually get to hear the voice of the playwright, in how they are informing the action of the play, the nonverbal moments.

Are there other things you want folks to know about Relative Theatrics, or the importance of theater for a community? I believe in the power of theater as a tool for reflection, as a tool for bringing people together, a means of bettering society when used reflectively. I’m so grateful for the support and the hunger that I’ve witnessed in the Laramie community to have these opportunities and to go there with these challenging plays. They’re really hard! They have difficult content! And every once in a while, I’m like, “I don’t know if I can do this.” And if it’s the play that scares me, it’s the play that I’m like, “Ok, I better do it.” And I’m just so grateful for all of our patrons and our donors and our subscribers and our community partners who supports this work and says, “yes, this is valuable. We want more of it.” Because it really reaffirms for me the importance of it and the impact that it can have for the betterment of everyone.

I think that sometimes there can be a negative stigma around “community theater.” But ultimately that is what we are. We pay all of our artists an honorarium for their work, so there is compensation for the time, but ultimately everyone is doing it because it’s a labor of love. So in that matter we really are a theater made by the community, for the community and it’s incredibly fulfilling.