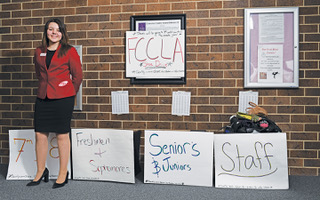 FCCLA Glenrock and Wyoming President Haylee Heaps, dressed smartly in her FCCLA red blazer, stands in front of boxes for the shoe drive at Glenrock Junior/Senior High School Feb. 16. Heaps helped organize the drive. The donated shoes will be distributed to people in third world countries.

How does one engage with the local community, let alone launch new programs and initiatives to support it, at a time when many community members are still quarantining and social distancing due to the pandemic?

That is the question faced by Glenrock High School senior Haylee Heaps, who is the Glenrock president – and now also the state president – of the national nonprofit Family, Career and Community Leaders of America.

The career and technical student organization, also known as FCCLA, is focused on empowering its student members to make a positive difference in their communities, families and chosen career fields.

Heaps, who also acts as the FCCLA VP of Community Service in Glenrock, admits that it has been a challenging year.

In previous years the group has provided volunteer services to the Glenrock Senior Citizens center, but not as much this year, due to the pandemic.

FCCLA membership this year in Glenrock has also dropped.

“A lot of kids are afraid to go out, to attend meetings and events,” she said Feb. 16 during an interview at school.

Last year, FCCLA had 70 members in Glenrock; this year the group has just 20 members at the high school and five at the middle school, Heaps said, though some of last year’s members also graduated.

Still, Heaps, 17, is committed to preserving and enacting FCCLA’s mission.

She’s helped to organize a shoe drive at the high school through the company Funds2Orgs; donated shoes will be delivered to people in third-world countries.

So far Heaps and her fellow FCCLA officers have collected more than 300 shoes, she said. They  plan to continue the shoe drive at other Glenrock schools, and the senior center, until it ends next month.

And, she is still thinking about other ways they can engage with the senior center while still keeping residents there safe.

For instance, FCCLA members, Heaps said, are looking to create a billboard sign to place in front of the center to honor St. Patrick’s Day on March 17.

There are still plenty of promotional activities Heaps and her co-officers are organizing at the high school, to raise awareness around FCCLA and its mission.

The high school held a variety of FCCLA dress-up days the week of Feb. 8, which culminated in the concoction and distribution of root beer floats to the student body by FCCLA members.

It’s those types of events that Heaps said she loves the most, because they allow her to work closely with her fellow FCCLA officers and other students.

Her favorite thing about being part of the group, she said, is “working close together and forming a bond that we wouldn’t have otherwise.”

Next month, the group will be holding activities at the school to raise awareness for Developmental Disabilities Awareness Month.

It’s an issue Heaps holds close to her heart. She intends to study and pursue child development and elementary education at Casper College, which she said she plans to attend in the fall. While there, she will help to provide care for her 11-year-old brother, who has special needs. She then hopes to matriculate to either Black Hills State University or Chadron State College.

Up until that point, she will help to plan the FCCLA state convention scheduled to be held in Cheyenne March 24-26.

But there is one member of the larger Wyoming community Heaps also recently had the pleasure of working with.

On Feb. 16, she took part in a group video call with Wyoming Gov. Mark Gordon, to discuss career and technical education in Wyoming.

“FCCLA has enhanced my high school experience and prepared me to go out into the world confident to meet the challenges that are ahead,” she told the governor in her remarks.

Judging from her efforts this year, Heaps seems ready for the challenge