Fake News is a Real Problem, but What if We’re the Cause? 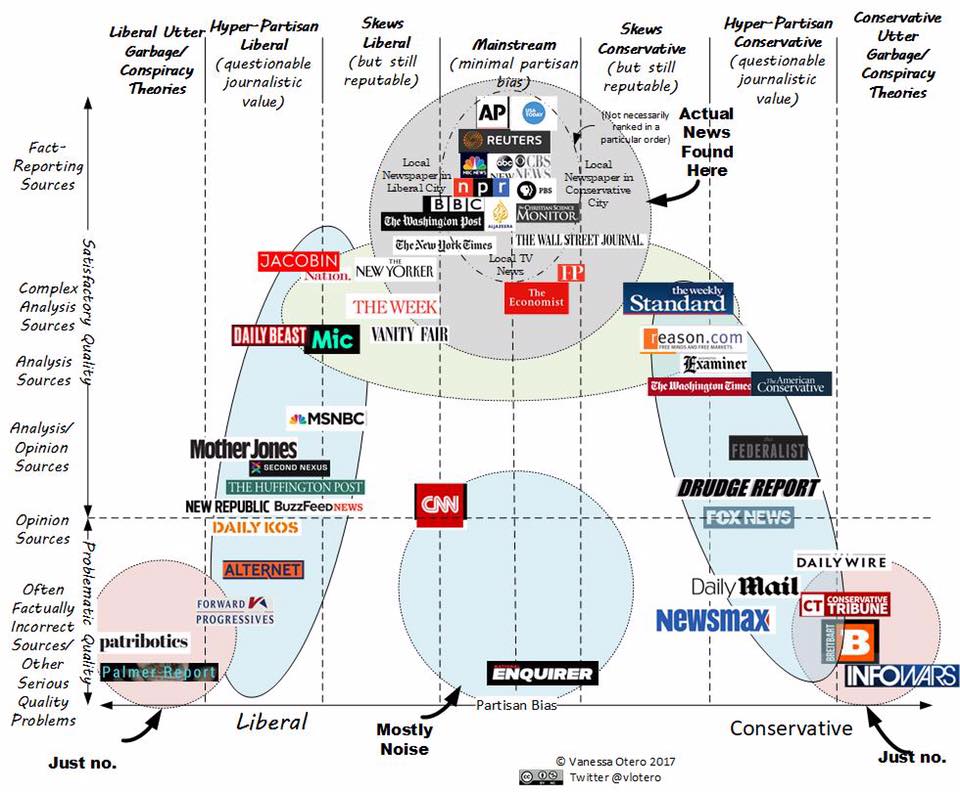 Early this year, we shared a story about the rise of “fake news.” The story led with the example of the Comet Ping Pong Pizzeria, highlighted the fact that we are not good at determining if headlines were accurate or truthful, and tried to show how certain places were attempting to combat this with print journalism. However, we cannot make the problem go away. In fact, if anything it has only gotten worse, and like the story we shared on our Facebook page from the Denver Post noted, rather than becoming more critical about news, some of us are simply more cynical.

So, let’s revisit the problem from a slightly different angle. Why does “fake news” exist, and what is it? Do you remember the last time you went to a “fake news” website? Probably not. As this infamous graphic, above, points out, most of the well-known news sources are not horrible; in fact, none are labeled as “fake news.” Individuals may disagree with the placement and categorization of their favorite news outlet but what these types of news outlets do is place a partisan lean and spin on the news. It is not wrong (most of the time), and it is not fake. It is the news and facts with some degree of someone else’s opinion. True “fake news” is fake, absurd, and not grounded in much of anything. It exists for one reason and one reason only, money.

You may be familiar with the idea of net neutrality. Simply put it is a way for your internet company to decide – based on money – who and what website is more important. Netflix or Facebook might pay AT&T for higher speeds on AT&T’s network so customers can watch their favorite show without streaming issues. You might see the inherent problem in this. Whichever company has the biggest bank roll will become the most popular site for their genre. However, it does shine light on a bigger problem: the internet – websites, and information you use – is not cheap or free. In fact, the only reason most sites exist is that they have found a way to monetize your activity.

Every time you visit Facebook, Google, Twitter, CNN, Fox, Yelp, or Instagram, you are making money for someone. Every click, scroll, view, post, share and action online generates money – billions. Your internet activity is big business. Think about it: Facebook surpassed a $500 billion valuation this summer – but when was the last time you, personally, paid to use Facebook? You don’t. Facebook tracks and sells information about everything you do. That picture of you at the football game, that’s why your ads are now sports related. Remember the post you shared about those sweet new shoes? Yup, Facebook sold that to someone else too. It all sounds like an invasion of privacy. It’s creepy but just about every site does this or allows another company to do this, and you agreed to it all in the terms of use during signup or by simply visiting the website.

So what does this have to do with fake news. What would you do for a share of billions of dollars? Fake news, clickbait, is about getting your click. As soon as you click on that headline with some absurd claim, you just made the owner of the website a little bit of money. That is why the internet and social media is filled with absurd and ridiculous headlines about the latest health trend, newest fat loss trick, craziest celebrity photos. Every time you take a seemingly innocent quiz that tells you which Harry Potter house you might fit into, the personality test that uses your favorite color to determine your ideal job, or share that amazing looking bacon-wrapped bacon hamburger topped with bacon bits recipe, you are making someone money. It is as simple as that. The story about honey and cinnamon curing what ails you, it has been around since the early 1990’s as a tabloid story. It is not new, or backed up by science. It survives because you share it.

So when you see the news story about how bad the super-volcano swarm is in Yellowstone and how we’re going to be blown away, or the story about Hurricane Irma becoming a Category 6 Hurricane, or most recently there was a story about Dallas Cowboy owner Jerry Jones not standing on the field with his players (there are pictures, he did kneel with his players), all of these not so crazy – fake – sounding stories are about making someone money. Sound too far fetched? Consider the revelations about the election news and fake social media accounts that were used to cause controversy.

Before you do anything online, be critical of your actions. Why am I doing this? Do I really need to find out what Disney princess, I would be? Why am I ‘liking’ this post? Is it true? Consider the story about Alejandro Villanueva of the Pittsburg Steelers. On Sunday October 1, he was a rebel and hero for the standing side of the National Anthem controversy. Pictures and posts about him defying his team and doing the “right” thing or being the only courageous man on the team were everywhere on social media. However, that was not the whole story; it was not fake, but it was not true either. Social media needs instant gratification. However, it was not until Monday when we heard from Villanueva that we understood his side and his actions. But even then, social media and our comments asserted we knew more about his actions than he did – He was forced to say those things by the NFL or coach Mike Tomlin – we continued to perpetuate unsubstantiated claims because the truth didn’t fit with what we wanted. Social media created a viral, fake news story and made Villanueva a tool for an argument he didn’t want to be involved in – while we can debate the role of professional sports athletes, even Villanueva stated directly he did not want to be a part of this.

Our stories and information about current events are multifaceted. They are complex narratives about conflicts that are tied to other conflicts influenced by all sides, and they cannot be reduced to a single picture, 140 characters, a like, a tweet, or a meme. If anything, the true story about Villanueva is much more interesting. His press conference reveals a complex decision that had been reduced to right and wrong – but the answers to our more pressing issues are not that simple, and we won’t solve them on Facebook or Instagram. There’s no truth test on Twitter.

In America, we have some laws about false information, but when it comes to the internet and sites published in another country, or even the opinions of people in our own country, we have no legal jurisdiction. The U.S. does not own the internet. Anything is fair game on the internet. Anyone can and do say anything to get the money you are generating.

T.V. is not different; every time you turn on the T.V. and watch your favorite station, you are making them money. However, because they are based in the U.S., they are subject to some U.S. laws, but they still put “spin” and commentary on each story (this our freedom of speech in action). Let’s face it, the news as a series of facts would be less interesting. How long would you continue to listen to the facts about the Muller investigation if the host of the T.V. news station wasn’t also telling you “what this new revelation means?” The reality is boring. As of today, nothing actionable has happened with this “news” story. They take one new factoid and create a whole conversation about it – but that is not news. The news is simply the one fact.

If you think this is wrong, or don’t agree with the system, bad news. We created it. Our constant drive for immediate answers and lack of patience has brought about the 24-hour news cycle. However, you can help the problem. Stop sharing every little meme about the new political scandal, think twice about the greatest new “thing” on social media, and employ critical thinking when watching or reading the news. You can get many of the facts in the first 10 minutes of the “breaking” news story – they will continue to talk but maybe you go outside, clean the house, or binge watch something on Netflix. The next four hours of commentary on the breaking news is just supposition and opinion.

Every once in a while, consider your sources as well – and maybe consider another voice or opinion. If it sounds like someone is speaking your thoughts and shares your exact opinion, it doesn’t make it more or less true. We are a diverse country, but that does not mean we have to be divisive. The issues we face are infinitely complex, not right or wrong, and they deserve to be talked about in more than 50 words. Wyoming Humanities is currently seeking a grant for 2018, funding from the Andrew W. Mellon Foundation and Federation of State Humanities Councils, with which we hope to bring another round of programming geared towards examining the role of journalism in our society and partner with Wyoming Public Media in the series “I Respectfully Disagree” – a project about civil discourse. Our society needs to be informed and needs news, but we also need to understand how to talk about it. The T.V. news model is not how things get done. When exploring a topic, we need facts and logical conversations; this takes time. Consider the infographic on news sources again – at the top is time-consuming, print journalism.

Want to learn more, check out this video by CollegeHumor: https://www.youtube.com/watch?v=5pFX2P7JLwA