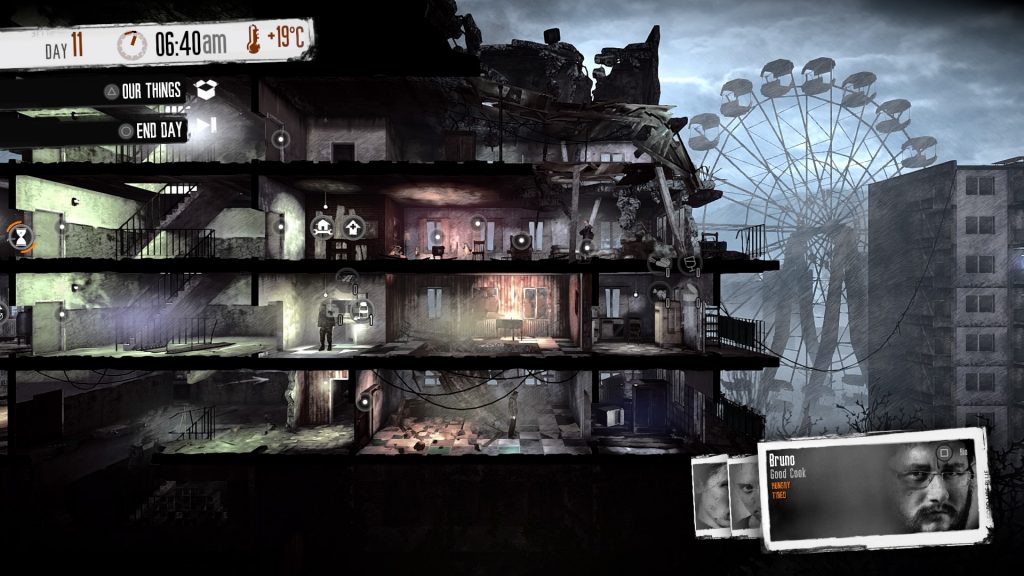 While we tend to think of them as a modern phenomenon, according to the International Center for the History of Electronic Games, the first video game actually debuted at the 1940 World’s Fair – an electronic simulation of simple game of pickup sticks called “Nim.” For the next thirty years, video games struggled primarily due to the simple fact that computers were not readily available to consumers. But in 1971 (ironically, the same year as the state humanities councils were formed), one of the most celebrated games in video game history, Oregon Trail, was released on a teletype machine. In its more than 40 year’s history, the game has endured through nearly a dozen iterations that have kept up with consumer demands and technology, creating a cultural icon for generations. Oregon Trail was more than just a game, it taught history while connecting us to actively experience the human component that often distances us from the past. This active connection is what separates games from reading and television to something more.

For those who played, and millions have, the anxiety of traveling the Oregon Trail across the West to Oregon and California was real. Broken axles, food scarcity, diphtheria, and snake bites were constant unknown perils. But the game’s historical background also served as an introduction or slightly “deeper” experience for players with little to no knowledge of the history of the Oregon Trail. Player decisions could have detrimental impact on the success of their journey. Too little food, too heavy a wagon, and the destination was not guaranteed; and each landmark brought a sense of respite and relief. All while being as accurate and true to the real journey as possible.

The game is the prime example of the “gamification” of education. Merriam-Webster defines gamification as “the process of adding games or game-like elements to something (as a task) so as to encourage participation.” Parents might be overly familiar with the concept turning household chores in competitions. The idea is simple: create an interesting and interactive way to engage someone in something, usually deemed less interesting.

Video games use this in multitude of ways and with numerous effects. The gamification effect engages players in an active way that provides a believable façade of control or influence. Often through perspective, world-design, and game-flow, players can become heavily invested in the fictional world seeing their avatar as an extension of their self.

This is a critical component of all literature, articulated in Samuel Coleridge’s willing suspension of disbelief – the idea that readers (audiences of drama and players of video games) would defer doubt and accept the fantastic if the work contained some component of tangible reality and thus become engrossed.

As technology has progressed, video games’ ability to transport the players into any number of imaginary fictions has grown exponentially. From starring as a cultural icon like Batman to creating larger than life living worlds on Earth and beyond, players have more choices than ever. And the dynamics of play have become just as complex as the worlds. Many games now progress and evolve based on player choice; that is to say player action affects constructs of the game environment and the narrative. Gone are the days of Mario zipping left to right; games like Deus Ex, Fallout, Heavy Rain, and many of the hugely popular Telltale games place a great degree of player choice into the game. No longer do “points matter” so much as the idea of experiencing narrative.

Nowhere is this engrossing effect felt more heavily than in This War of Mine: The Little Ones. The original game has been called the antidote to modern war blockbusters like Call of Duty that often glorify battlefield experiences. This is primarily because, although This War of Mine is a game about war, it is not about soldiers. And while some firearms exist and some violence is inevitable, the game focuses on refugees of an unnamed war.

The game developers came up with the general narrative based on real events, primarily the Bosnian War of the 1990s. The goal of the game is simply to survive. When the player begins the game, three random characters with certain real-life attributes and desires are spawned in a dilapidated building. The rules are simple. During the day, no one leaves the house. At night, one character scavengers for supplies – food, water, scrap iron – while the rest sleep or stand watch for intruders. Like many other games, the player then utilizes materials to make improvements, food to maintain health, and luxuries (like cigarettes) to boost character moral. The game focuses on basic questions of survival and the unseen realities of human suffering that comes with war.

What makes this game stand out is that the task being gamified is all too real. The game world is bleak, represented in stark, almost charcoal-esque drawing style. The music is drab and melancholy. And the difficult choices the player makes are not only impactful on the world but on themselves.

The player does not embody a specific protagonist but rather represents the group and is able to control any of the characters, one at a time. Every character is prone to have unique and helpful skills but vices as well. And all of the characters are affected differently, emotionally and physically, by the situations they are in.

In the beginning of the game, players have less advantageous equipment so must scavenge from “safer” areas. One of these is home occupied by an elderly couple. They pose no physical threat to the player but after breaking and entering into the home, all of the players recognize the gravity of the situation. They become regretful and even depressed. The character diaries and commentary are filled with rationalizations of why stealing from the elderly and infirm is a necessary evil but reveal their remorse and hatred of war.

Often food is scarce and the player must choose who will eat, and who will become weak or sick. Additional survivors often come to the door during the day looking for food or medicine. The player must decide to help or not. Knowing that the characters might benefit from the temporary boost to their moral by helping, the player can give away critical, life-saving supplies that might be needed the next day.

The choices made are life and death. Characters who get sick or starve can all too easily die and are a heavy burden on the rest of the characters. Depression can cause characters to run off or, worse, commit suicide or attack other survivors.

And then come the little ones. From time to time, children appear at the door seeking a safe place to stay. The player can choose to accept the children but they are the largest liability, needing food, medicine, and solace while understandably contributing little. But turning them away causes a level of despair for the survivors than is not often overcome.

Forty years after the Oregon Trail, This War of Mine: The Little Ones follows the same game flow. After a month or two, a ceasefire is declared – our survivors have reached the end of the trail, if they survived. For the player, the reward is in the journey reading the journals of the survivors every few days and coming to a closer understanding of what life is like in this time – what they thought and more importantly, how they felt.

As conflicts like that of Syria continue for months and even years, it often takes stories of horrific magnitude to reach the attention of the west and tell the story of the people rather than of the warring sides. This War of Mine brings us closer to the humanity of the event. The game asks the player to survive for a trivial 40 days, not years, and the task for the average player can be insurmountable. The grief, depression, heartache, and tragedy is tangible. For a few hours, the player is asked to willingly assume a role in the most appalling of places and then return to the safety of home. But for those who live in situations like this game, there is no safety. And not unlike the unnamed departed on the Oregon Trail, many people perish as collateral damage in global conflicts every day trying to do nothing but survive.

Paul Darvasi, working with UNESCO and the Mahatma Gandhi Institute of Education and Peace, is working on a paper to detail how games can leverage the active nature of playing (as opposed the passive nature of reading and watching) to breed empathy and compassion. Perhaps if we negotiated peace with those not directly involved with conflicts in mind, we might a new urgency for peace because they are often the ones who suffer the most. And even though most of us have little control or even influence in these events, playing games like this provides a new perspective. One that encourages us to “take a closer look” beyond the latest news story to understand, to find empathy, and to find a new sense of compassion that might force us to reflect deeper on own conflicts. This is the critical role the humanities serve whether through history, literature, discussions, theatre and film, or even video “games.”