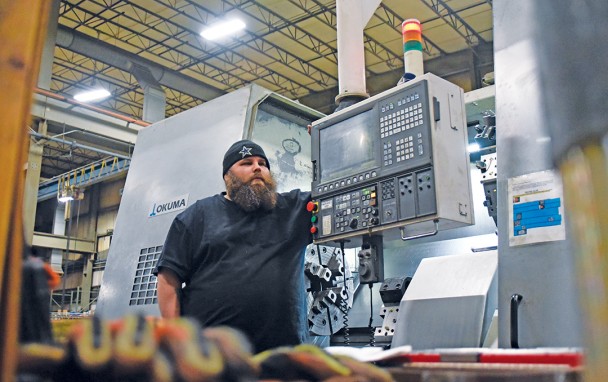 Phillip Hand, a machinist with Hunting Energy Services, stands by a CNC lathe that he operates at the company’s facility in Casper. The machine is used to create rotors and other parts for oil drills.

Thankful to still have work, family will soon relocate to Texas with new company

Phillip Hand, 36, has lived in Glenrock for 15 years – 2021 will be his last. This summer, he plans to move with his wife and three children to Houston, to continue his work as a machinist for the oil and gas industry.

“It’s a nice community,” he said of the town he will be leaving. “I’m going to miss it.”

Hand, unfortunately, has been put between a rock and a hard place. Relocating to Texas is not the realization of a dream or goal he has had; rather, he is making the move pragmatically, after the company he works downsized and acquired by another company.

He was one of a handful of employees given the choice to either relocate to Houston to work for his new employer or face an uncertain future at home.

Many of his colleagues were not so lucky. A large number of them were let go as the coronavirus pandemic and oil & gas energy bust took hold of Converse County last year, and more still were laid off after the acquisition by the new company this past December.

Hand’s story puts a face and a name on the larger issues plaguing the struggling oil and gas industry, which has been impacted not only by the pandemic and the energy bust, but now also the Biden administration’s ban on new federal drilling leases.

The company he has worked for in Casper – Hunting Energy Services, a subsidiary of London-based Hunting PLC – provides drilling tools, electronics and other products for the oil and gas industry. Hand specifically operates CNC lathes, which produce rotors and other parts for the drills that extract oil from the ground. The parts he has helped to produce have been used in oil fields in Texas and North Dakota.

Before the bust and the acquisition by Houston-based Rival Downhole Tools, Hunting, based in Casper, had upwards of 40 employees in their shop; currently they have less than 10, Hand said.

Hand’s hours were also cut, resulting in roughly $800 lost per month, though at the moment he is back to working a regular 40-hour week.

His wife, Julie, took a job at Walmart in Casper to help make up the lost hours.

The cuts did have at least one upside: Hand found the time to write a children’s book titled “Yamel’s Camel Wears a Flannel,” which was published by Christian Faith Publishing. It can be found on Amazon, Windy City Books in Casper and the Glenrock Public Library.

“The pandemic gave me time to do it,” he said.

Still, sales from the book have not been enough to live on, so Hand and his family are preparing themselves for the big move to Texas.

The Hands’ move comes amid a slowly returning national appetite for consuming fossil fuels, which helps drive up the price.

Consolidation is one result. Rival’s acquisition of Hunting was positioned as a move to help the Houston firm expand internationally, starting with the Middle East.

Hand, for his part, is cautiously optimistic that staying on with Rival and making the move is the right decision for his family, though he acknowledges the volatility.

Working in the oil and gas industry, he said, “is always murky waters.”

“But now, with renewable energy kicking into high gear like it hasn’t before, and with the pandemic going on, it’s even worse than before,” he said.

And, “I am thankful every night that I still have my job.”

(Editor’s note: Reporting is made possible through a grant from Wyoming Humanities funded by the “Why It Matters: Civic and Electoral Participation” initiative, administered by the Federation of State Humanities Councils and funded by Andrew W. Mellon Foundation.)