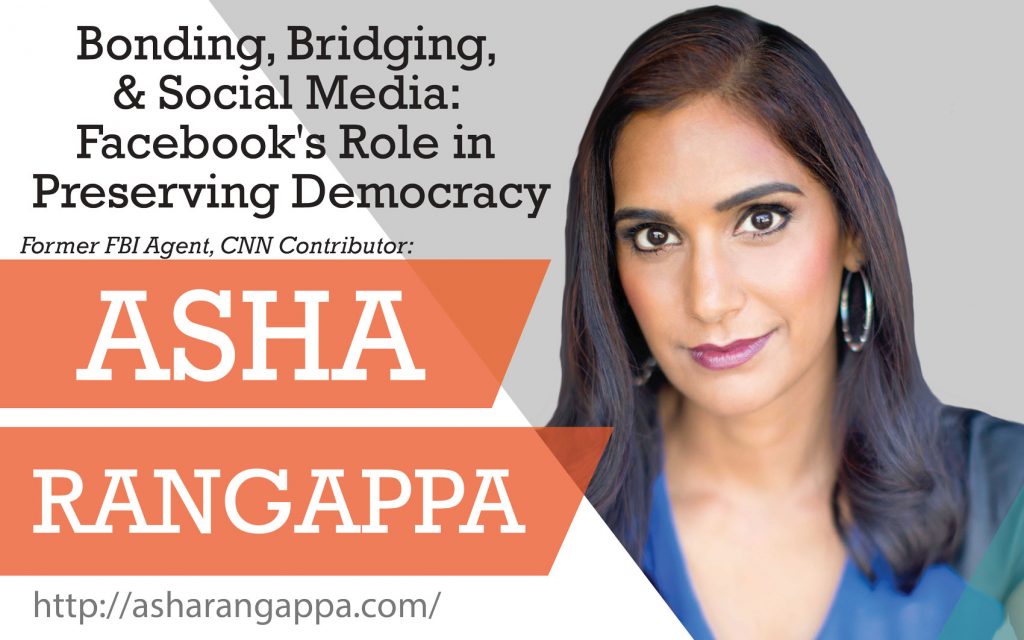 In the upcoming months Wyoming Humanities will help Wyomingites explore what it means to be an informed citizen as well as the history of tribal nations’ negotiations and treaties with the United States.  In short, the summer and fall of 2018 will see programs that encourage folks to reflect on being an engaged citizen in the current world and how our past informs that citizenship.

Later this month, Yale professor and former FBI agent Asha Rangappa will kick off Wyoming Humanities’ “Democracy and the Informed Citizen” initiative.  This initiative, funded by a significant grant from the Andrew W. Mellon Foundation grant to the Federation of State Humanities Councils, explores the role of journalism and the power of the humanities to enrich understanding of local and national issues and to inspire an engaged citizenry.  Professor Rangappa’s talk, “Bonding, Bridging, and Social Media: Facebook’s Role in Preserving Democracy” will focus on how social media silos people with similar political viewpoints.

Over the next six months, Wyoming Humanities will expand on the topics of Prof. Rangappa’s talk, exploring how people who disagree can find common ground.  Our initiative partners, Wyoming Public Media and Wyoming PBS, help expand the view of what this “common ground” might look like.  In her series “I Respectfully Disagree,” for instance, WPM reporter Melodie Edwards sits down with everyday Wyomingites who are on opposite sides of an issue. This series presents examples of those who disagree doing so civilly, on issues from a detention center in Evanston to Gillette’s response to national politics.  And a future episode of Wyoming PBS’s Wyoming Chronicle will feature a panel of Wyoming journalists reflecting on the state of Wyoming journalism and Wyomingites’ trust in public institutions.  Wyoming Humanities will also partner with WPBS and WPR to jointly broadcast a talk by a nationally-recognized expert, to be revealed later this spring, who will discuss the state of public discourse and the democratic virtues of moderation, civility, and compromise. As part of this initiative, Wyoming Humanities will also be releasing a second edition of our popular Heal Up and Hair Over: A Wyoming Civility Reader later this year.

Wyoming Humanities will also be helping to mark multiple 150th anniversaries in the upcoming months.  This includes a commemoration of the signing of the 1868 Treaty of Fort Laramie by the Native Nations of the Northern Great Plains.  “After the last tribe signed the treaty, the impacts that followed were harsh and sudden as American Indian tribes were moved from open lands to reservations and were transitioned from a nomadic lifestyle to a more regimented way of life, including new forms of school and government as cultural traditions were prohibited.”  The commemoration will begin at dawn on April 28, and the day will include prayer, smudging, drums, songs, dancing, perspectives on American Indian history and treaties, and remarks from government and American Indian dignitaries.  You can view the full schedule here.

Along with this great commemoration, there will be a 150th commemoration of the Fort Bridger Treaty signing July 3rd, Laramie is celebrating its 150th as one of the many towns formed along the Union Pacific Transcontinental Railroad, and later this year we will begin looking towards the 150th anniversary of Women’s Suffrage in Wyoming. Wyoming is approaching many important milestones in our history, and we hope you will continue to join us as we mark these historic dates in our history.