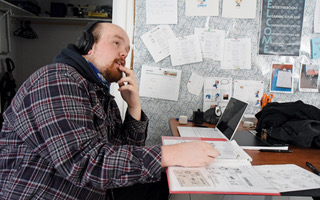 In early 2016, Trevor Deming, then a freshman at Douglas High School, had a meeting with Temple Grandin, the prominent American scientist and activist.

Special education teacher Cheri Lehner arranged the meeting because she was looking for Deming to meet someone who had struggled early on and was now successful. She also wanted to know how he could progress through high school and work through, as he called it, “the boring stuff.” Grandin’s insights mattered to Deming because they had something in common. Both are on the autism spectrum.

During the informal meeting held at an educational conference in Casper, Deming also showed Grandin some of his early efforts at drawing comics. That encounter helped set Deming on a new path toward success.

Since then, Deming, now 20, has progressed through high school and has earned enough credits for his diploma – a powerful statement coming during World Autism Month which began April 2 with World Autism Awareness Day.

And Deming has developed into an accomplished, published cartoonist. His original comic strip, “Toon Trev Strip Shorts,” appears on the editorial pages of the Douglas Budget on a bimonthly basis.

“I’ve always been into art and fan art,” Deming said during a recent visit with him at The Bridge, an extension of Douglas High School where older students with special needs work on life skills.

“Art makes me happy,” he added.

Deming spends several days a week at The Bridge with other special- needs students where he works on his comics and learns vocational and life skills like finances, setting a budget, cooking and laundry.

Though Deming’s social communication skills are less developed than most, his comics communicate a range of human emotion. They are witty, playful and topical, often drawing on the current season, holidays and other events.

In his comic for Earth Day 2021, for instance, the two main characters – Toon Trev and Sparky – discuss where they are supposed to properly dispose of their trash.

They are dismayed to discover that it is merely taken to “Trash Island.”

Deming has steadfastly produced the comic strip for the Budget since last year.

His sources of inspiration are quite varied – many pre-date his birth – perhaps owing to the eclectic nature of his comics. They include the 90s animated series “The Twist- ed Tales of Felix the Cat,” 1950s-era science fiction, the 1963 Japanese television series “Astro Boy,” and fan art in general.

When he is not working on a new comic, Deming has pursued other creative projects.

He recently designed a CCSD#1 T-shirt with his Toon Trev characters on it to raise money for Special Olympics Wyoming athletes.

So far, more than 30 shirts have sold to members of the community. Shirts can be ordered by contacting Bridge Coordinator Mary Ann Maidl at mamaidl@ccsd1.org

Deming also works part-time at Safeway, where he checks the expiration dates on stocked items.

Deming earned his high school credits last year, though he will likely spend another year at The Bridge several days a week. During that time, he will continue to work on mastering life skills, before he officially receives his diploma.

Maidl, who has worked with Deming since this past August at The Bridge, explained he initially had some difficulty adjusting to the program.

“It’s been an adjustment for him, partly because it’s so different from high school. If he doesn’t like some- thing, he lets you know it,” she said.

Deming is more of a visual learner, she said, so those working with him often use visual aids, pictures and notes to communicate with him.

He also likes having a daily schedule and knowing when his various activities will begin and end.

In recent months Deming has become more independent and has also started to do his own laundry, Maidl said.

Over the next year, Maidl, aides

and his family will look to identify other job opportunities for him that are more in line with his interests in art and technology. They will also continue to help him become more independent.

His mother, Melissa Deming, said he has been drawing since he was 4 years old. When he was younger, he used to write letters in a Walt Disney-styled font.

“He’s always had that artistic slant,” she effused.

But one of his biggest challenges continues to be his fear of stepping outside his comfort zone, she said.

Still, she’s optimistic about the future.

“Autism,” she said, “is full of un- knowns and it’s scary. But it’s not the end of the world. Anything is possible.”

Deming himself does not seem sure where he wants to take his Toon Trev comic strip next.

But he is interested in taking a trip outside Wyoming, to see and experience new things.