Changing the World One Shot at a Time 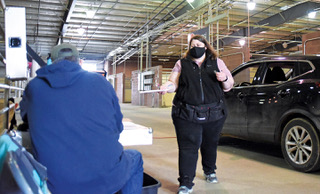 When Johnna Shepherd, Converse County’s public health response coordinator, started her new job in February last year, she was told by her predecessor that the work consisted of “planning for stuff that isn’t going to happen.”

She quickly learned that every- thing she was planning for would happen.

By March, Shepherd and others working for the Converse County Public Health Department under Nurse Manager Darcey Cowardin were thrown into daily meetings with health officials and other stakeholders across the state, as health experts, community and state leaders frantically scrambled to understand the scope of the novel coronavirus, and develop strategies for fighting it.

“I felt lost,” Shepherd said.
But over the course of the past year, the small but mighty team of nurses, coordinators and managers with the department have risen to become some of the community’s unsung heroes of the pandemic.

As of early March 2021, they’ve tested nearly 6,000 Converse County residents for the virus, inoculated roughly 2,500 people with their drive-thru clinics and have provided a range of informational resources and tools to help keep people in- formed, safe and healthy.

This past fall, the virus positivity rate in Converse County – the percentage of tested people who tested positive – was critically high, around 14 percent. Currently

the rate is below 4 percent. “They’ve done a spectacular job in helping to get us through this changing time in history,” Converse County Commissioner Robert Short said.

The department has also ex- celled in combatting misinformation around the virus and fear- mongering around the vaccine, Short said.

“It’s not always a friendly environment for them to do their job,” he admitted.

Indeed, the department’s success in providing care for the com- munity has not been without its challenges.

Particularly in the early days of the pandemic, the team of six faced backlash over the business operating restrictions, mask-wearing mandates and other recommendations designed to keep the com- munity safe.

Other abrasive interactions she had with residents – some of whom opposed the early restrictive orders – “felt like personal attacks,” which shook her faith in the com- munity, she said.

“This has been the most difficult time in my nursing career,” Cowardin said, adding that staff turnover has also been a concern.

But she would not let the department be deterred.

Going forward, the department will be providing training sessions to help combat burnout and rising stress levels among its staff members.

“We just have to keep our heads down, plow ahead and keep going. There’s no option to stop,” Cowardin said.

Thankfully, the sense of pride and accomplishment felt by the department’s staff appears to trump the negativity and backlash they have experienced.

Through the drive-thru testing and vaccine clinics the department has held, community relationships have been strengthened with a host of local partners who have helped to organize the events and volunteer at them, including the fire and police departments, the emergency management office and the Memorial Hospital of Con- verse County, Cowardin said.

But, she conceded, her proudest moments might be when she administers the COVID vaccine and sees the smallpox vaccine scars on the arms of some of those very same people.

“We’re changing the world, one shot at a time. I’m so proud to have a part in that. I’m so proud of our staff going through it,” she said.

“I like feeling useful to the community,” she said, particularly during the vaccination drive-thrus held in Douglas, Glenrock and Rolling Hills.

In the months ahead, the department will continue to hold their vaccine drive-thrus. Clinics for the second dose of the vaccine are scheduled for April 1 and 10 at the fair- grounds in Douglas and April 24 at the maintenance shop in Rolling Hills. Other clinics are on tap and will be advertised as they are scheduled.

Staff members said as the weather gets warmer and days become longer, they are also looking to hold events in the evenings and possibly on Saturdays.

The work being done by the Public Health Department is having an effect. COVID hospitalizations and cases in Wyoming have declined over the past couple months, prompting Gov. Mark Gordon to relax attendance limits for various events and, his office announced Monday, eliminating restrictions for masks and all limitations for restaurants, bars and gyms, among other changes as of March 16.

While the pandemic and all of the political, economic and social impacts have dominated the news and most of our lives during the last year, the Public Health Department hasn’t stopped doing its job . . . providing a range of services beyond just vaccinations and tests for COVID. They provide family planning services like birth control prescriptions, emergency contraception and STD testing and treatment, a larger communicable disease program for disease outbreak investigation and tracking, maternal and child health services and adult health programs like blood pressure screening and monitoring and diabetic support groups.

“There’s more to the world,” Cowardin said, “than COVID.”

Editor’s Note: Reporting is made possible through a grant from Wyoming Humanities funded by the “Why It Matters: Civic and Elector- al Participation” initiative, administered by the Federation of State Humanities Councils and funded by the Andrew W. Mellon Foundation.