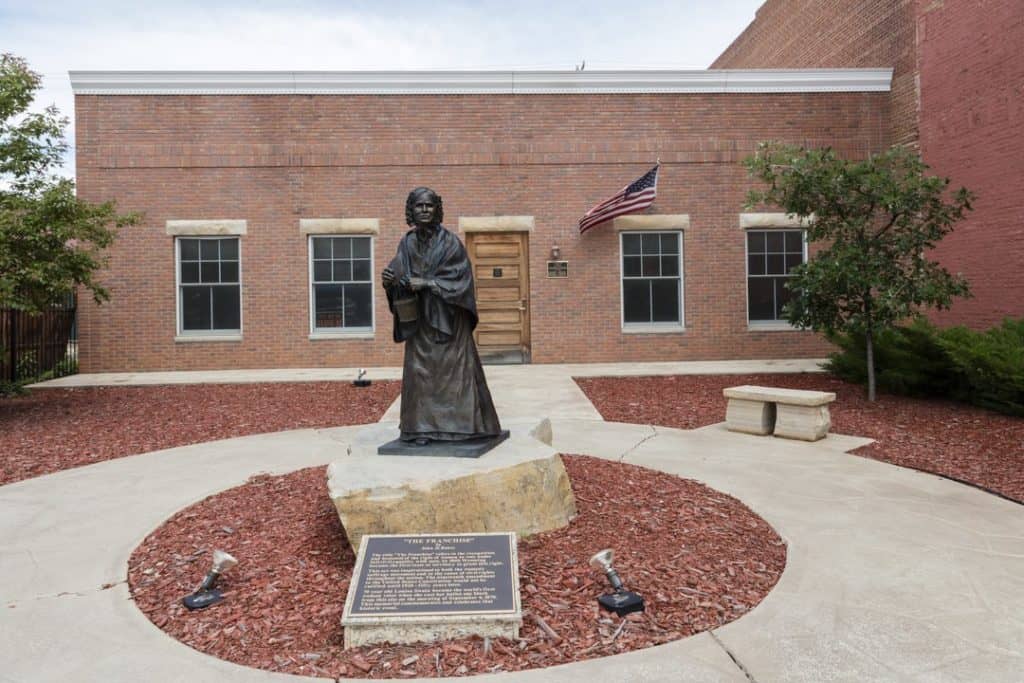 On December 10, 2019, Wyoming commemorates the sesquicentennial anniversary of Wyoming Territory passing “An Act to Grant to the Women of Wyoming Territory the right of suffrage, and to Hold Office,” commonly known as the Women’s Suffrage Act. I am proud that Wyoming Humanities was selected by former Governor Matt Mead to serve on the Governor’s Council for the Wyoming Women’s Suffrage Celebration. We will celebrate the women’s vote in Wyoming between December 10, 2019, the 150th anniversary of Wyoming Territory passing the suffrage act and September 6, 2020, the 150th anniversary of Louisa Swain casting the first democratically cast ballot by a woman in Laramie on September 6, 1870.

The Wyoming Territorial Legislature passed the suffrage act less than five months after the territory was created by Congress and a full 50 years before the U.S. Constitution was amended to include women’s suffrage. Even more remarkable is the fact that 20 years later, when Wyoming was admitted to the Union in 1890, the territory insisted on retaining women’s suffrage as they became a state. While women had been voting in territorial elections for two decades, territories do not vote for president and do not have full representation in the U.S. Congress. Despite a vigorous push by the U.S. Congress to force Wyoming to rescind women’s voting privilege in order to become a state and prevent women from voting in federal elections, Wyoming refused. When we were admitted as the 44th state we also became the first state to allow women equal and full voting and political rights and in the next presidential election in 1892, a woman somewhere in Wyoming became the first female to legally vote for president.

Unfortunately, Wyoming’s role in the women’s suffrage movement is not widely understood in America and has not been clearly integrated into the national narrative of the decades-long fight for women’s right to vote and the final ratification of the 19th Amendment in 1920. In April 2017, Congress passed legislation to create the Women’s Suffrage Centennial Commission (S.847) “to ensure a suitable observance of the centennial of the passage and ratification of the 19th Amendment to the Constitution of the United States providing for Women’s Suffrage.” Try as we might to get Wyoming’s story of being first by 50 years into the national narrative of women’s suffrage, we struggle to get the Centennial Commission to state more than the date we ratified the 19th Amendment, January 27, 1920.

Given that our state constitution, drafted over 30 years earlier, stated “The rights of Citizens of the State of Wyoming to vote and hold office, shall not be denied or abridged on account of sex. Both male and female Citizens of the State, shall equally enjoy all civil, political and religious rights and privileges,” one would think it would have been a simple exercise for Wyoming to ratify the amendment, but timing got in the way. Congress passed the 19th amendment on June 4, 1919, several months after Wyoming’s Fifteenth Legislative Session closed. It then went out to the states to ratify. Wyoming wasn’t due for their next session until January of 1921. Suffrage activists in Wyoming and around the nation turned to Theresa Jenkins to convince Governor Robert D. Carey to convene a special session of the legislature. Carey had deep respect for Jenkins, and convened the special session, telling Jenkins, “I know that if you did not think it the right thing for me to do you would not have asked it.”

When the legislature met from January 26-28, 1920, Governor Carey addressed a joint session of the two houses noting that Wyoming’s ratification was becoming vital to enacting the amendment and that “the opponents of suffrage have been using as an argument against granting equal rights to women that Wyoming had not [yet] ratified [the Constitutional amendment] for the reason that suffrage had proved a failure in this state. … [W]e could not allow such a charge to be unchallenged.” On January 28, both houses voted unanimously to ratify, making Wyoming the 27th of the 36 needed to make the 19th Amendment law.

Yes, our role in ratification of the 19th Amendment is an important part of women’s suffrage history. But I believe our role is far greater because we modeled for the rest of the nation, and indeed the world, that women’s participation in the civic/public sphere was healthy and wise. Our Governor’s Council for the Wyoming Women’s Suffrage Celebration is working hard to help our state, and our nation, better understand our story. Thanks to incredible work done by the Wyoming Office of Tourism, another member of the Governor’s Council, the Smithsonian Magazine published “Women Have Been Voting in Wyoming for 150 Years, and Here Is How the State Is Celebrating” this past June. They also maintain a website where you can find out what’s going on around the state to celebrate sesquicentennial and you can order cool at the Women’s Suffrage Store.

Wyoming Humanities has invested in many suffrage projects to help the state understand our suffrage history, and how it has shaped who we are today. You can find an incredible section of information on Women’s Suffrage and Women’s Rights in Wyoming on our state’s peer-reviewed history website and online encyclopedia at WyoHistory.org. That’s where you can take a deep dive into the historical context and social nuances that enabled us to be first in women’s voting. We have also invested in the creation of a documentary film, The State of Equality, by Caldera Productions and funded a scholarly symposium, Women’s Suffrage on the Northern Plains at the University of Wyoming. We recently awarded a grant to the Washakie Museum in Worland for an exhibit titled, “The Vote: Women’s Suffrage Wyoming and Beyond” that will explore how our equality wasn’t really so equal, for instance Native American women did not have the right to vote even in 1920 as they weren’t considered citizens until 1924.

Wyoming Humanities has also launched a year-long podcast series, titled “First, But Last” to celebrate the year of women in Wyoming in honor of our suffrage sesquicentennial. This podcast features women’s stories about life in Wyoming and whether or not we’ve lived up to our state nickname, the “Equality State.” And later this year we will announce more exciting suffrage projects related to commemorating Louisa Swain’s first vote in Laramie.

As you can see, there’s a lot to learn and experience regarding women’s suffrage. We hope you can join us on December 10 in Cheyenne, where we, along with the rest of the Governor’s Council for Wyoming Women’s Suffrage Celebration, will be hosting several major events. A Suffrage Walk from 17th and Carey to the capitol with an all-female color guard and featuring many of our state leaders will start the day and then Governor Gordon will sign a proclamation in the rotunda of the capitol. There will be public talks and tours of the capitol all afternoon and then the day’s celebration will culminate at 7pm with Wyoming PBS hosting a premiere of the State of Equality documentary film at the Cheyenne Civic Center. For all the information you need about our Suffrage Day Celebration go to https://travelwyoming.com/suffrage-events.

This incredible year of suffrage-related programming is a perfect example of the collaborative spirit of the cultural network of Wyoming. We are proud to be one of the organizations that comprise the core infrastructure of this network. We could not do this work without the support and generous donations from individuals who believe in our mission. Please consider us in your gift planning and make an online donation at https://thinkwy.org/donate/. From all of the staff and board of directors of Wyoming Humanities, we wish you a joyful holiday season and an intellectually stimulating and prosperous 2020.