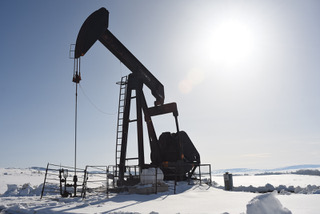 An unattended pumpjack rises and falls in Glenrock March 19. Wyoming currently has seven active drilling rigs, down from 20 a year ago. The pandemic and the economy still poses uncertainty for the oil and gas industry.

A derrickhand is an important worker at an oil and gas drilling site. Typically, it is the person who ensures the drilling rig is operating smoothly and there are no loose tools or debris flying around.

But what should a derrick- hand do when the work starts to dry up at the source?

That is the question Cameron Lopez, a local derrickhand, faces as Wyoming’s oil rig count has dropped to seven.

Lopez is one of countless oil and gas workers who have been impacted over the past year by falling oil prices, the pandemic, and now uncertainty tied to the Biden administration’s clean energy policies.

His story offers a microcosm of the larger issues plaguing the oil and gas industry that have dominated many of the head- lines over the past year.

Lopez works on a rig south of Wright managed by Unit Drilling Company, a subsidiary of Unit Corporation, an oil and gas company headquartered in Tulsa, Oklahoma.

Over a dozen of his coworkers were laid off last year. Lopez him- self was laid off in the summer of

2020, but was brought back to work a few months later.

But the future makes him uneasy.

“It sucks,” he said. “I’m always worrying about when my last paycheck is going to be.”

A year ago, his employer operated 15 to 20 rigs in Wyoming.

By February of this year they were down to 2.

In May of 2020, Unit Corporation’s common stock was delisted from the New York Stock Exchange, after the company filed for relief under Chapter 11 bankruptcy code.

Lopez, who lives in Rolling Hills, said he has enjoyed the pay and the work schedule of his job, which is typically two weeks on followed by two weeks off.

But the challenges the industry faces weigh on him.

He has been considering going into a new line of work. The problem, he said during an interview, is that he’s not sure what other work is out there that pays similarly and does not require a college degree. Lopez only has a high school diploma.

“If I found something that paid about the same, I would get out,” he said.

Lopez was introduced to oil drilling work through his father, who introduced Lopez to someone else in the industry. He’s been doing it now for roughly 10 years.

On a typical day, he said, he is focused on making sure the mud pumps and the mud processing equipment is running smoothly. He also assists other engineers and keeps an eye out for leaks.

Lopez said he knows people working on other rigs that have closed over the past year, and those people still don’t have jobs. He said he’s been looking for new work online, but he’s not sure what exactly he’s looking for. He said he has no interest in getting an advanced degree.

“There’s a lot of construction jobs,” he said, but compared to what he currently makes as a derrickhand, “nothing pays roughly the same.”

Editor’s Note: Reporting is made possible through a grant from Wyoming Humanities funded by the “Why It Matters: Civic and Electoral Participation” initiative, administered by the Federation of State Humanities Councils and funded by the Andrew W. Mellon Foundation.