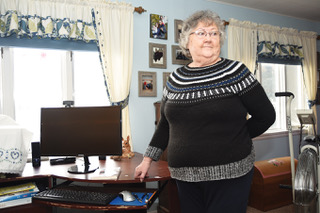 The Glenrock Independent, 2/10/21, text and photo by Zach Miners

Longtime resident Bonita Hunt stands in her bedroom next to the computer she used to digitize the typewritten manuscript of her first novel, “Warbo,” which she first began writing in the 1960s.

It was sometime in the late 1960s. Longtime resident Bonita Hunt had a black & white television with only two stations, no car, and her husband was spending much of his time working at the Glenrock coal mine.

A burst of inspiration struck her – or perhaps she was merely looking for an escape from her sense of ennui.

“This thought came to me: a story about a girl captured by Indians on her way to California to marry her fiance,” she said.

The idea stuck, and she kept at it for years.

After much hard work and time spent in the library, she produced a roughly 80,000-word manuscript for a novel – her first – called “Warbo,” a

romance western set during the great Western migration of the United States. But – it would be decades before she

actually got it published.
Now, some 50 years later, as Hunt

approaches her 80th birthday in June, the novel has finally been published, by Denver-based Outskirts Press.

Were it not for the coronavirus pandemic, it may never have been published at all.

Hunt did a fair amount of research into the Pawnee tribe, which factors prominently into the story, took a writing course at Casper College, and even attended a writers convention in Riverton, during the 1970s when she was in the thick of writing the book.

Her first stumbling block, how- ever, came during that writers convention. She met with an agent from the Doubleday publishing company, who requested she cut down the manuscript to 30,000 words.

“I got busy, raising kids, and I put it on the back burner,” she said.

She also worked as a realtor in Glenrock, a job she held for 17 years.

Then, in January of 2020, her husband Cliff, after 61 years of marriage sadly passed away, after having been diagnosed with Alzheimer’s disease at age 75.

As the family went through boxes in Hunt’s house in search of photographs for the funeral, they came upon the manuscript.

Two months later, her son Lyle became infected with coronavirus, prompting Hunt to quarantine at home because she was one of his close contacts.

With more time on her hands, she got back to work on the novel and began making some edits. And with the help of her grand-

But other than them, “Nobody gave me help on nothing,” Hunt said with a laugh, sitting at her dining room table.

She found a publisher in Out- skirts Press and got the book published, still at roughly 80,000 words.

Hunt was a little nervous about having the book published, partly due to some of its sensitive subject matter, and some nudity it contains.

“I was worried about what people would think,” she said.

But the audience reception, to her relief, has been positive. Some fans have even asked her to autograph their copies.

The book is available on Amazon as well as the local Flower Shop in Glenrock at 215 S. 4th Street. She is also looking to have it sold in more local shops, like Jen’s Books in Douglas.

Hunt said she has no other writing projects currently in the works, though she has expressed interest in having an audiobook version of “Warbo” produced. Still, “Right now I’m done,” she said.

“I didn’t go into it for the money. It just felt good to write it. I enjoyed the process of writing it,” she said.

But while Hunt might be done with writing, she’s not done with promoting the book.