Donate Now
Single Donation
Recurring Donation
Thank you! Your submission has been received!
Oops! Something went wrong while submitting the form

Collection of past programming that continues to share and expand the Wyoming narratives.

The Way We Worked

Workers are the backbone of American society. Known for their strong work ethic, Americans invest themselves physically, emotionally, and intellectually in their work.

American jobs are as diverse as the American workforce. The opportunity provided by work is central to the American dream and has attracted people to better lives in America. With strength, ingenuity, creativity, thoughtfulness, and heroics, American workers keep our economy and our society up and running.

The Smithsonian Traveling exhibition The Way We Worked, adapted from an original exhibition developed by the National Archives, explores how work became such a central element in American culture by tracing the many changes that affected the workforce and work environments over the past 150 years.  The exhibition draws from the Archives’ rich collections to tell this compelling story. 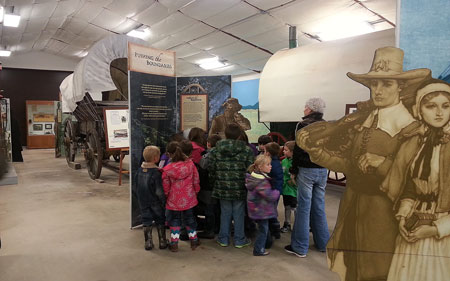 Writer Symposiums/Workshops featured PEN/Hemingway writers and other writers associated with the legacy of Hemingway (such as Casper native, CJ Box) were held in multiple events in libraries, colleges, high schools and in remote locations (where Hemingway did most of his writing). Iraqi war veteran Kevin Powers, award-winning author of The Yellow Birds conducted events in the Sheridan area prior to September. Check out explorehemingway.com to find out more.

Exhibitions took several different approaches to Hemingway’s legacy. The Ernest Hemingway Oak Park Foundation agreed to loan their traveling exhibit to Wyoming during the grant period. The exhibit emphasizes A Farewell to Arms and Hemingway’s service as an ambulance driver in WWI. This WWI focus gave us the opportunity to establish the broader context of Hemingway’s work during the 100th anniversary of the end of the Great War. One exhibit featured artists who interpret Hemingway’s works through their work (paintings, sculpture or other media). Another exhibit emphasized Hemingway’s Wyoming connections. Our goal was to have at least 2 exhibits travel to 6-8 communities. Check out explorehemingway.com to find out more.

Community Forums, principally run by Saturday U, featured an interdisciplinary emphasis to extend themes in Hemingway’s work to broader cultural discussions. Another potential forum included speakers (along with a preview) from the Florentine Films production team (Ken Burns documentary film company) associated with the multi-part Hemingway documentary set to be released in 2020. See Saturday University resources above.

Performing Arts emphasized an interdisciplinary engagement with Hemingway’s legacy. Original music interpretations (such as a proposed operatic interpretation of The Old Man and the Sea by an SC music instructor), as well as theatrical performances (such as Carol Hemingway’s Hemingway on Stage), were performed in conjunction with other events.